The village Doubrava (German Taubrath ) belongs to the municipality Lipová u Chebu (German Lindenhau) in the Eger district , Karlovarský kraj in the Czech Republic . 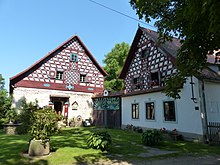 Facade of a half-timbered house in Doubrava

The place is located in the west of the Czech Republic a few kilometers south of the city of Cheb .

Taubrath was first mentioned in a document in 1313 when Arnold, canon in Prague and clergyman in Königsberg an der Eger ( Kynšperk nad Ohří ), mediated a dispute between the Commandery of the Teutonic Order in Eger and the Hospital of the Order of the Cross and the Teutonic Order the income from the village of Taubra was guaranteed. Taubra appears in the archives of the Order of the Cross with the place names "Tauber" and "Taubenhof".

The claw tax book of the city of Eger from 1392 contains the first nine personal names in Taubrath. The draft book from 1395 names nine peasants who were required to serve. In 1606 the Order of the Holy Cross sold the village of Taubrath and its income to the councilor Wolfgang Bayer in Eger and the farmers of the village were under the authority of the city of Eger until 1848.

In 1780 cobalt - manganese ore was found in fields near Taubrath , which was then called "Black Earth Kobold". There was a suspicion of this ore and mining existed until the 19th century, the pits of which were abandoned when no pure cobalt ore was found.

Taubrath came to the parish Altalbenreuth ( Mýtina in Czech ) through a parish order of 1850 and belonged to the parish of Palitz with seven other localities. Before that she was a parish village in the parish of Neualbenreuth from 1787 . After the end of the Second World War (1939-1945), the German-speaking residents of Taubrath were forced to leave the place by the Beneš decrees and mostly came to Bavaria as expellees .

Several Egerland half-timbered buildings with magnificently designed house facades, characteristic of the Egerland , which have been preserved to this day. Most of these square courtyards were renovated in the years following the opening of the border to Bavaria in 1990. In one of the courtyards there is a private open-air museum, in which, in addition to the architecture, agricultural implements and typical furnishings are shown.