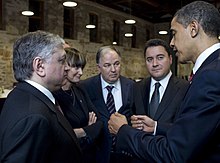 Edward Nalbandjan ( Armenian Եդվարդ Նալբանդյան ; born July 16, 1956 in Yerevan ) is an Armenian politician and was his country's foreign minister from April 2008 to May 2018.

Nalbandyan studied at the Moscow State Institute for International Relations until 1978 . In 1988 he obtained the degree of candidate in political science with a focus on international relations at the Institute of Eastern Studies of the Academy of Sciences of the USSR .

Nalbandjan began his diplomatic career in 1978 at the embassy of the Soviet Union in Lebanon . In 1983 he moved to the Foreign Ministry in Moscow and, in 1986, initially served as counselor to the Soviet representation in Egypt . After the collapse of the Soviet Union, he was initially employed by Russia for a short time before he was appointed Armenia's official representative in Egypt in 1992. In 1994 he was appointed ambassador to Cairo . Until he left Egypt in 1998, his business area included Morocco and Oman . In 1999 he moved to France as ambassador . From 2000 he was also responsible as ambassador for Israel , from 2004 also for Andorra . From December 2006 he also served as envoy of the Armenian President Robert Kocharyan at the International Organization for Francophonie . In April 2008, when President Serzh Sargsyan took office, Nalbandyan was appointed Foreign Minister. However, he had previously represented his country at numerous international conferences.

Due to the dispute over the assessment of the Ottoman genocide against the Armenians , Armenia and Turkey had not had diplomatic relations until then. On October 10, 2009, Nalbandjan and his Turkish colleague Ahmet Davutoğlu signed two protocols in the auditorium of the University of Zurich , on the basis of which diplomatic relations between the two states should return to normal.

Nalbandjan is non-party. He is married and has a daughter.

Foreign Minister of the Republic of Armenia (since 1991)