The Elisabeth Bridge was a bridge over the Vienna River and connected the two municipal districts of Inner City and Wieden .

At the junction between Kärntner Strasse and Wiedner Hauptstrasse , a wooden bridge was mentioned as early as 1211, and between 1400 and 1404 it was replaced by the “Stainerne Prugken bey Chernerthor” (stone bridge at Kärntnertor). In 1414 a Gothic cross column, the so-called baker's cross, was erected on it . Over the years, various statues of saints were added, but these were removed in 1821 when the bridge was widened and renovated, as were the stone walls on the side. On the bridge the road and sidewalk were separated by a wall. The bridge originally had twelve arch openings, but five of them disappeared over time as part of regulation work. The bridge had weirs and locks between the pillars, but these could hardly withstand floods. After it was discovered in 1846 that the bridge was no longer in order, it was demolished in 1850.

A temporary bridge has been erected for the time being. In 1847, following a competition, Ludwig Förster decided to carry out a project . It was a brick bridge with stone cladding. It had three arched openings, seven meters long, and quay walls were also built to secure the banks. After the collapse of the crossing at the site of the later Karolinenbrücke in 1851, the originally planned foundation was changed to a pile foundation . On her wedding day (April 24, 1854), Empress Elisabeth made her solemn entry into Vienna across the bridge, thus opening it. 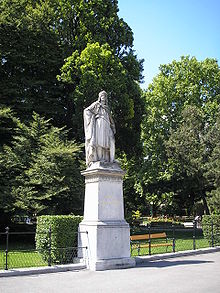 Monument of Heinrich II Jasomirgott on the town hall square

On November 19, 1867, eight marble statues were erected on the bridge, which were created on the initiative of the Association for the Promotion of Fine Arts . The City of Vienna also supported the production financially on the condition that the statues became their property. When the Viennese Tramway Company wanted to build a tram route across the bridge, it was temporarily only allowed to operate a single track, so that from June 17, 1877, one-way traffic in opposite directions across Wiedner Hauptstrasse and Karlsgasse- Favoritenstrasse -Mayerhofgasse was used. After tough negotiations, the second track was put into operation on June 22nd, 1880. On the occasion of the Vienna river regulation and the arching of the river at what would later become Karlsplatz , the bridge was closed on April 20, 1897 and then removed. A temporary bridge was used until the vaulting of the Vienna was completed. The statues were temporarily set up at the Karlsplatz tram station , where they quickly became soiled by the soot from the steam locomotives and were therefore popularly known as The Eight Chimney Sweeps. They were therefore transferred to Rathausplatz in 1902 .