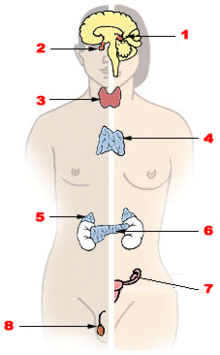 An endocrine gland , incretory gland or hormonal gland (formerly also called blood vessel gland ) is a gland that releases its substances - in contrast to an exocrine gland - directly into the blood without a duct ( endocrine "releasing inward", "inner secretory"). Since all hormones are secreted endocrine , the terms "endocrine" and "hormone gland" are used interchangeably. The endocrine glands are part of the endocrine system , which includes the hypothalamus as the “master gland” . The hypothalamus and pituitary gland control numerous functions in the vertebrate endocrine system. The endocrine system also includes isolated endocrine cells of the gastrointestinal tract. From these hormones are excreted, which regulate food intake and digestion; other endocrine cells are found in the heart and kidneys (see tissue hormones ). The scientific discipline that deals with hormones is called endocrinology .

The first experimental proof of the existence of an “internal secretion” came in 1849 from the Göttingen physiologist Arnold A. Berthold . As the first human disease to be traced back to the failure of a gland with internal secretion, the English doctor Thomas Addison described adrenal insufficiency in 1855 .