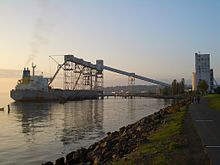 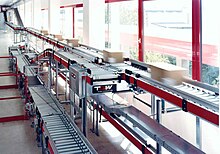 Conveyor technology for piece goods in a distribution center

The conveyor technology (FT) ( English material handling ) is a branch of engineering that deals with the design, the design, planning and execution of funding for conveying of cargo (pallets, crates, packages, individual workpieces etc.) or bulk ( Sand , ore , grain, etc.). The transport of liquid media and gases with pipelines is usually not part of conveyor technology, but part of plant construction .

Conveyor technology is initially understood to mean the actual technology ("conveying means" such as cranes , belt conveyors , forklifts ), but also the process design when operating the systems. The conveyor technology specialist area therefore includes the entirety of all transport , transshipment and storage tasks or processes, both in technical and economic terms. This area is often summarized under the term logistics .

In contrast to traffic technology , which deals with long-range transport, conveyor technology deals with the movement of goods in defined operational areas such as ports, airports, in mining or in industrial plants.

In the factory automation play pneumatic drives, for example for conveying semi-finished and finished products, a significant role. The pneumatic conveying system of the pneumatic tube is rarely used today.