This article describes the rock church as a type of church. For churches of the same name, see Felsenkirche (disambiguation) . 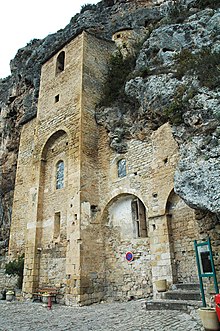 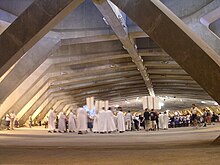 A rock church is a church carved out of or into the natural rock . The churches carved into the rock are also referred to as cave churches .

Many rock-hewn churches can be traced back to Christian hermits who sought shelter from rain and wild animals under rock walls. In later times these protective walls were hollowed out by devout followers. While the existence of cave churches has already been documented for Christian antiquity ( St. Peter's Grotto in ancient Syria or the early cave churches in Göreme , Cappadocia ), cave and rock-hewn churches in Europe and Africa only became widespread in the course of the Middle Ages.

Among the most famous structures of this type are the rock- hewn churches in the cave settlements of Matera in southern Italy (for example San Pietro Barisano or Santa Maria dell 'Idris and San Giovanni ), hundreds of cave churches in the tuff rock of Cappadocia and eleven monolithic rock-hewn churches in the Ethiopian pilgrimage site of Lalibela , which also how Göreme was declared a UNESCO World Heritage Site in Turkey .

Other striking examples are the monastery church in Vardsia, South Georgia (12th century), the orthodox rock churches of Ivanovo near Russe in Bulgaria (13th-14th centuries) or the cave churches in today's Russian Oblast Voronezh ( e.g. Divnogorje ). Closely related to Rock and cave churches are Christian cave monasteries, including the Russian Orthodox Kiev-Pechersk Lavra from the 11th century , which is a World Heritage Site .

Based on the medieval predecessor buildings, modern rock and cave churches were also built in the 20th century, including the Temppeliaukio Church in Helsinki ( Finland , 1969), the rock church of St. Michael in Raron ( Switzerland ) and the salt cathedrals in the granite rock Wieliczka Salt Mines ( Poland ) and Zipaquirá ( Colombia , 1954/1999).

Occasionally, churches that are built on a striking rock are also referred to as rock churches, including, for example, the rock church of Idar-Oberstein or that of Lüderitz , but this does not correspond to the common definition.

The underground basilica of Pius X in Lourdes , completed in 1957, should also be mentioned in this context.