Zipaquirá is a municipality ( municipio ) belonging to the metropolitan area of ​​Bogotá in the department of Cundinamarca , Colombia . It is 48 kilometers from the Colombian capital Bogotá and was founded in 1600. Zipaquirá is known for its salt cathedral and also has a beautiful colonial old town with numerous buildings from the 18th century. The city is a popular destination for residents of the greater Bogotá area. Zipaquirá is the seat of the Zipaquirá diocese .

In the area of ​​today's Zipaquirá there was already a place called Chicaquicha before the arrival of the Spaniards , which was of great importance in the region because of the salt occurring in the area. On July 18, 1600, Luis Enriquez founded the Spanish town of Zipaquirá, where the indigenous population of the region was supposed to live. Since 1692, Spanish settlers were also allowed to settle in Zipaquirá. There has been a parish in Zipaquirá since 1779. Zipaquirá played an important role during the Comuneros uprising in New Granada in 1781. The first hospital was built in 1790. At the beginning of the 19th century, salt mining became more and more professional. Zipaquirá became a prosperous city through the salt production and already had 19,000 inhabitants in the middle of the 19th century. Zipaquirá received with the Tren de la Sabana one of the first train lines in Colombia, which connected Zipaquirá with Bogotá. Today this train line is the only one that is still in operation, but it only functions as a tourist attraction on weekends.

Zipaquirá is an important regional center where various companies are located, in particular for the processing of beef. In addition, trade plays an important role. In the rural part of the municipality, agriculture is the most important industry. There are potatoes , peas and carrots grown.

Tourism is also an important source of income. The city is visited by around 50,000 tourists a year because of the Salt Cathedral. 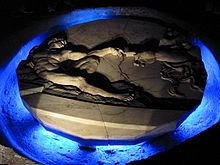 Sculpture in the Salt Cathedral

Zipaquirá is home to the so-called Catedral de Sal (Salt Cathedral), a church built entirely from salt in a salt mine. The first salt cathedral opened in 1954 , but closed to visitors in 1992 due to the risk of collapse. The new salt cathedral has been open to the public since 1995.

The underground salt cathedral is one of the largest religious buildings in the world: it has three aisles, 120 meters long and an area of ​​around 8,500 square meters, its domes, which are blasted into the salty rocks.

Inside the cave church everything is carved from salt crystal: numerous monumental crosses, graceful angels and some statues of the Madonna - all made of salt. Next to the main cathedral are small chapels and a Way of the Cross (Via Crucis), the 14 stations of which are connected by a number of labyrinthine tunnels.

Zipaquirá can be reached by bus on weekends and by Tren de la Sabana . The train, powered by an old steam locomotive, connects Zipaquirá with the capital Bogotá as well as with Nemocón , Cajicá and Chía through the Sabana de Bogotá plateau . It is operated by the company "Empresa Colombiana de Vías Férreas" (Ferrovías).

In Zipaquirá there is the Estadio Municpal Héctor El Zipa González football stadium , which is named after a Colombian national player from Zipaquirá and has a capacity of around 7,000 spectators. The stadium is not approved for the first division, but regularly hosts second division football. From 2009 to 2011, the second division soccer team Expreso Rojo played its home games in Zipaquirá . Also Fortaleza FC was from 2011 until his promotion in 2013 its home games in Zipaquirá from. After relegation in 2016, the club played again in Zipaquirá until 2017. In 2017 the traditional club Cúcuta Deportivo also played in Zipaquirá.