Rocamadour (also Roc-Amadour, Latin: Rupes Amatoris ) is a French commune with 606 inhabitants (as of January 1, 2017) in the Lot department in the Occitanie region and a place of pilgrimage of the Roman Catholic Church . The name is derived from the holy Amadour , a hermit who found refuge here at the foot of a steep rock ( French Roc ).

Rocamadour borders the Lot département in the neighboring region of Nouvelle-Aquitaine . The historic provinces of Quercy and Périgord also meet here. The place is located on a cliff in the largely dry Alzou Valley and in the Causses du Quercy Regional Nature Park .

The legend puts the origins of the pilgrimage in early Christian times. When in 1166 an uncorrupted corpse was discovered in an old grave on the threshold of the Lady Chapel, it was believed that the legendary hermit Amadour had been found. Various miracles are reported which spread the glory of the place of grace.

There are different legends about the hermit: It is often said that he is the tax collector Zacchaeus (cf.Lk 19: 1ff), who took the name Amadour (Amator) and came to Gaul as a hermit after Christ's death from Jericho and the sanctuary founded. Sometimes the hermit is equated with one of Mary's house servants . Others speak of Amadour as St. Veronica's husband , who came to Gaul from Palestine together with St. Martial . In the 17th century a connection was established with the holy bishop Amator of Auxerre , but this cannot be verified.

In any case, the hermit is said to have carved the figure of Mary out of a tree trunk. In reality, the miraculous image of the enthroned Mother of God with the child sitting frontally on her left knee probably belongs to the 12th century. 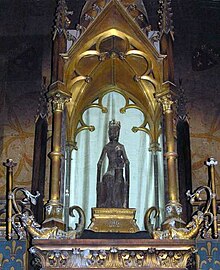 The black mother of God

The first documentary mention of the place can be found in 968 in a document that prompted the donation of the surrounding area to the Benedictines of Tulle . A Benedictine of this monastery wrote the first miracle reports in the twelfth century, which were reissued in 1907 by a priest of the diocese of Cahors.

The pilgrimage to the Black Mother of God ( Vierge Noire ) was very famous in the Middle Ages. However, many pilgrims did not come here of their own accord; the pilgrimage was imposed on them as a penance. This practice of canon law had developed in the Carolingian era and, since the 13th century, has also become a punishment imposed by secular courts, especially in Holland .

Upon arrival in Rocamadour, the penitential pilgrim had to put on a dress made of coarse material and chains on his neck and arms. Then he had to kneel up the great stairs to the sanctuary to a pillory . In front of the altar of the chapel he begged for forgiveness, for which he was issued a certificate. Then he could acquire the leaden pilgrim badge.

Well-known pilgrims were St. Dominic , St. Bernard of Clairvaux , and the French King Louis IX. and in the 20th century the French composer Francis Poulenc . According to his own testimony, the philosopher Raimundus Lullus also visited Rocamadour.

In 1534, the navigator Jacques Cartier attached the flag of the Madonna of Rocamadour to the mast of his ship sailing to Canada as protection from storms.

The chapel was destroyed in the Hundred Years War . The Protestant captain Bessonies smashed the body of Saint Amadour in 1562. The miraculous image and a bell hung in the chapel, which, according to legend, announced miracles by ringing automatically, were spared. The current chapel is a 19th century building.

In 2013 the pilgrimage to the Madonna of Rocamadour celebrated its 1000th anniversary, the motto was: "Because nothing is impossible for God" ( Lk 1.37  EU ) and thus alludes to the belief in miracles that has always been associated with Rocamadour . This gave new impetus to the pilgrimage site, which receives around one million visitors annually, but only 3–5% of them are pilgrims. In fact, Rocamadour was able to welcome 80% more pilgrims in the anniversary year. A total of 380 groups from Germany and abroad were guests.

The three levels of the village: below the village, in the middle the Sanctuaire , above the medieval castle 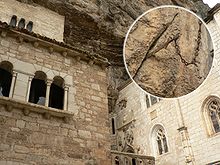 The three levels on which Rocamadour is located are worth seeing each individually and in their entirety. On the lower level is the village, whose medieval houses nestle against the steep slopes above the gorge of the Alzou River. From there, visitors can climb the Great Staircase to the Holy City ( Sanctuaire ) from the 12th century.

On this second level there are seven churches: the most important is the Lady Chapel Notre Dame de Rocamadour , which stands above the crypt of St. Amadour. Also important is the Saint-Sauveur basilica, which, together with the crypt, has been part of the UNESCO World Heritage “ Camino de Santiago in France” since 1998 . There are also the smaller chapels: St. Jean-Baptiste , St. Blaise , St. Anne and St. Michel . There is also a museum with sacred art, in which numerous reliquary shrines, religious paintings and statues are shown. It explains the history of the pilgrimage site. There is also a center for sacred music that organizes concerts and looks after choirs.

On the top of the mountain, the third level, there is a castle from the 14th century. In the anniversary year 2013, a campsite for young pilgrims and scouts was opened on the plateau. It is called 'Camp Jean-Paul II ' and can accommodate around 400 pilgrims.

According to a legend, the sword that is stuck in the rock face is said to be the legendary Durendal sword from the song of Roland .

Other nearby attractions include:

Rocamadour gave its name to a small goat cheese also known as Cabecou . It has had a protected designation of origin since 1996 . For more details, see Rocamadour (cheese) .

World Heritage Site of the Camino de Santiago in France: Via Podiensis

Near the path: Saint-Sauveur Basilica and Saint-Amadour Crypt in Rocamadour  | Saint-Caprais Cathedral of Agen  | Church of L'Hôpital-Saint-Blaise

Municipalities in the Arrondissement of Gourdon