The flag of Iceland has been showing a white and red cross on a dark blue background since June 19, 1915.

The dark blue area symbolizes the Atlantic Ocean and the blue sky over Iceland. The red and white cross stands for fire (volcanic activity) and ice (glacier), whereby the Scandinavian cross expresses the bond with Scandinavia , whose origin goes back to the Dannebrog .

The Law on the State Flag of Iceland and the State Coat of Arms describes them below (loosely translated):

“The Icelandic civic flag is blue as the sky with a snow-white cross, a fiery red cross within the white cross. The width of the cross extends to the ends of the flag. The width of the cross is two ninths horizontally and vertically, the red cross is only one ninth of the overall flag. The blue areas are rectangles. The left rectangles have the same length and width, the right rectangles are twice as wide as they are high. The ratio of the overall flag between height and width is 18:25. " 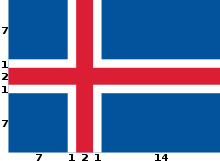 Structure of the national flag

According to the legal provisions that came into force in 1991, the colors are based on the following textile colors (according to the Dictionnaire Internationale de la Couleur )

The Icelandic government is considering defining the color in the more popular Pantone and CMYK systems . However, no further steps have been taken in this regard, and therefore the following statements are unofficial suggestions:

In 1897 the poet Einar Benediktsson wrote about the flag issue in his first Icelandic daily newspaper, Dagskrá , which he founded and defined the flag there alongside the coat of arms. He suggested a white Scandinavian cross on a blue background. The Hvítbláinn ("the white and blue") prevailed as Iceland's first, unofficial national flag and almost corresponded to the current flag of Shetland .

At the Olympic Games in Stockholm in 1912, the Danish sports management banned Icelandic athletes from participating under their own flag, which caused unrest among athletes and youth organizations.

On June 12, 1913, another incident in the port of Reykjavík heated the minds when a captain of the Danish coast guard arrested a young man for rowing the blue and white flag. The population protested the attack by pulling out blue and white flags from all over the city. The Reykjavík representatives for the Icelandic parliament, the Althing , demanded that the Icelandic flag be anchored in law at the next thing assembly.

But the Hvítbláinn was rejected by the flag committee because it looked too similar to the flag of Sweden and especially the naval flag of Greece . Instead, a red cross was added and the civil flag of Iceland was created, which has been used as an unofficial identification symbol since 1913. In agreement with the Danish king, the Althing achieved that this "special flag" (Særflag) for use inland and in domestic waters could be officially used for the first time on June 19, 1915 to represent Iceland as part of Denmark . During the First World War from 1914 to 1918, the Icelandic ships sailed in more distant waters under the Danish flag. It was used as a regular ship's flag from December 1, 1918 to 1944. Except for the slightly lighter blue, it was already identical to the current flag. With its new shade of blue, it only became the official state flag with Law No. 34, which was enacted on June 17, 1944, on the day the republic was founded. 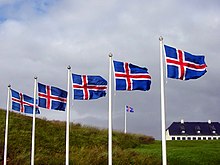 When Iceland gained independence on June 17, 1944, a law on the state flag and coat of arms was passed. To date, this law is the only one dealing with the state flag, with the exception of two other legal texts from 1991 that describe when the flag should be hoisted. The other text contains a detailed description of the appearance of the flag. However, this only brought the previous practice of coloring to paper.

The law also describes the dimensions of the normal and special government flags used by embassies and the Ministry of Foreign Affairs. It also goes into detail on how the flag should be hoisted in different situations, such as: B. on the flagpole, on the building or on ships.

According to this law, the use of the flag is a privilege and not a right. The owner of the flag must follow the legal instructions when using it and ensure that the flag is in a good general condition. The law also condemns failure to respect the flag in word and deed, with a fine and imprisonment for up to one year.

The original law of 1944 contains in the 7th article an extension of the law regarding the official occasions when the flag is hoisted or the time when the flag should be raised again in the evening. However, it was almost 50 years before this amendment was passed in 1991, which stipulates that the flag should not be hoisted before 7 a.m. In addition, the flag should be raised again at sunset, but no later than midnight . If the flag is to be hoisted at an outdoor gathering, official gathering, funeral or memorial service, it may remain hoisted for the duration of the event, but not beyond midnight.

State flag at the embassy in Helsinki

The Fifth Law of January 23, 1991 stipulated the days on which the flag should be hoisted nationwide. This means that the flag is hoisted on federal and official buildings, as well as on buildings managed by state agencies and state officials. Additional days can be added annually on the direction of the Prime Minister's Office.

The flag must be hoisted at full mast on the following days , with the exception of Good Friday, on which half-mast position is required:

The national flag is cut out triangular on the flight side to a third of the flag length ( dovetail ). The president's flag also shows the country's coat of arms in a white square above the intersection of the cross. Since Iceland has no armed forces, it does not have war flags either .

Overview of all national flags