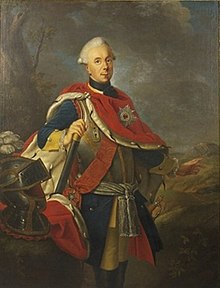 In Berlin, Frédéric Reclam first learned the art of painting from the court painter Antoine Pesne . At the age of eighteen he went to Paris, where he lived with the court jeweler Lempereur, whose son Jean-Denis Lempereur drew and etched with him. Reclam received lessons from the painter Jean-Baptiste Marie Pierre in Paris . In March 1756, the Académie royale de peinture et de sculpture awarded him a 3rd prize in the model class. Then Reclam moved to Rome, where he created numerous landscapes in the style of Hubert Robert . He also visited places in the area, such as Tivoli .

In 1762 Reclam came back to Berlin from Rome. Here he painted a few portraits of members of the court. He worked for Prince Heinrich , the king's brother, in Rheinsberg Castle . He also worked for Prince Ferdinand . Together with his friend, the painter Daniel Chodowiecki , Reclam became a member of the Prussian Academy of Arts in 1764 .