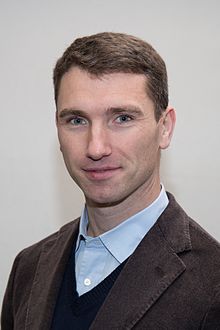 From 1997 to 2004 Franz served in the German Armed Forces , which he left as a sergeant major ( tank artillery ). From 2003 to 2006 he trained as a physiotherapist . Since 2007 he has been working as a freelance programmer and graphic designer . He is the owner of an agency that deals with the Internet activities of the NPD.

Franz has three children and lives separately from his wife. Since 2015, Franz has been in a relationship with Patricia Koperski, the editor of a right-wing publisher who once made a guest appearance on the series Gute Zeiten, Bad Zeiten .

In 2004 he was elected district chairman of the NPD in the Saarbrücken district association. In 2005 he became state chairman. By virtue of his office, he has been a member of the party executive committee since 2006. In 2008 he ran unsuccessfully for the office of mayor in Ottweiler . In 2009 he moved into Völklingen's city ​​council and was parliamentary group chairman there until the 2014 election. In 2011 Franz ran for the office of Lord Mayor in Saarbrücken and received 2.8% of the votes.

At the national party conference of the NPD in November 2011, Franz was elected to the advisory board of the federal executive committee.

Within the party, Franz is controversial because he is considered the foster son of Peter Marx , who was no longer confirmed in the office of general secretary at the party congress in the wake of a failed coup attempt at the beginning of 2009 because party leader Udo Voigt accused him of spinning an intrigue in front of the delegates . At events organized by Franz's regional association in the past, critics of the former party chairman Udo Voigt (until 2011) appeared, for example the challenger Udo Pastörs, who failed at the federal party conference in early 2009, or the chairman of the parliamentary group in the Saxon state parliament, Holger Apfel . The chairman of the DVU , Matthias Faust , also appeared at joint events, albeit before the two parties' Germany pact was terminated in 2009.

Since November 2011 Franz has been a member of the NPD federal executive committee as press spokesman. In 2014 he was elected national chairman to succeed Udo Pastörs.

Party leader of the NPD