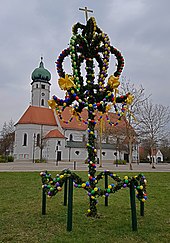 Easter crown , set up by the Frauen Union Eichenau in April 2019

The Frauen-Union (FU; own spelling: “Frauen Union”) includes all female members of the CDU in Germany (approx. 155,000), provided they do not contradict this. Women who are not members of the CDU but feel committed to the goals and tasks of the Women's Union can also join. In Bavaria , the women's union of the CSU , which is independent of the women's union of the CDU, is a working group of the CSU , but has its own membership, which means that membership does not take place automatically when you join the CSU. Its goal is to motivate women to participate in politics, to enforce women's claims to representation in party organs and parliaments and to get involved in women's political education. The FU has been publishing the magazine Frau und Politik since 1955 .

The FU sees its roots in the middle-class Christian women's movement in the middle of the 19th century. After 1945, women's committees of the CDU and CSU were set up in the zones of occupation . On May 1, 1948, the “Women's Association of the CDU / CSU in Germany” was formed from these committees in the “Monopol” hotel in Frankfurt . Helene Weber , among others, was in charge of this establishment . At the party convention of the CDU in Karlsruhe in 1951, the Federal Women's Committee of the CDU was constituted under Margarete Gröwel . This committee separated organizationally from the sister party CSU. In January the newspaper “Frau und Politik” appeared for the first time.

In 1961, Federal Chancellor Konrad Adenauer and Elisabeth Schwarzhaupt appointed a woman to the federal cabinet for the first time after massive action by the women's association.

In 1988 the women's association was renamed "Frauen Union". Annette Widmann-Mauz has been federal chairwoman since 2015. Honorary chairmen are Rita Süssmuth and Maria Böhmer .

For reasons of denominational proportionality, the CDU's federal women's committee and the women's association were each headed by a Catholic and a Protestant chairman until 1969 .

Associations and organizations of the CDU

Chairwoman of the Women's Union

(For reasons of denominational proportionality, the FU was headed by a Catholic and a Protestant chairperson until 1969.)