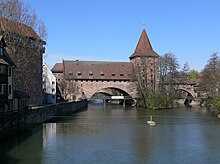 Fronveste (left) and Schlayerturm (center), in front of it the Kettensteg, seen from the city center (from the east)

The Fronveste (sometimes also written "Fronfeste") is part of the fortification of the Pegnitz outflow of the last Nuremberg city ​​fortifications .

The Fronveste spans the southern outflow of the Pegnitz in the west of the city wall. It is attached to the Schlayerturm in the north and connects to the part of the city wall called the 'West Gate Wall' in the south.

In 1824, the chain walkway designed by the mechanic Conrad Georg Kuppler was built on the inner city side of the Fronveste , to which massive supports were added in 1930 and which was renewed in 2010. On the outskirts of the city, the Hallertorbrücke is a short distance away .

In 1490 the bridge-like, single- bay sandstone block building was erected on a flying buttress and provided with a gable roof. It was used as an arsenal and therefore called the spit house. The building, together with the Schlayerturm and the other fortifications, was supposed to protect the Pegnitz outflow. In the 19th century it was used as a prison, which is how it got its current name. In 1938 it was converted into a retirement home and destroyed in 1944/45.

After the reconstruction in 1957, the “old people's home on Kettensteg” was housed in the Fronveste until the 1980s, since then the building has been used to accommodate students and resettlers.