The goosander ( Mergus merganser ) is the largest representative of the genus of the sawmill from the family of duck birds (Anatidae). The distribution area is Holarctic and includes large parts of northern Eurasia and North America. There are three subspecies.

In Central Europe, the goosander is a widespread, but rarely frequent breeding and annual bird. In the winter months, the species can be observed more frequently in Central Europe as a migrant and winter visitor. At the IJsselmeer hibernate up to 20,000 individuals and the large inland lakes troops are occasionally observed consisting of several hundred Goosander.

Goosander are with a body length of 58–68 cm and a wingspan of 78–94 cm significantly larger than mallards . In the plumage both sexes are very similar. They can then be most easily distinguished in flight by the white, continuous field on the upper side of the male's wing.

In the breeding dress (late autumn to early summer) the male is characterized by a black, partly greenish, shiny head and back. These contrast with the white plumage of the trunk, which can have a slight salmon tint on the underside. The male goosander lacks the protruding hood that is characteristic of the female as well as of both sexes of the similar, smaller middle- sized saw ; it has a compact, close-fitting head .

The female's dormancy and breeding dress are uniform and very similar to that of the middle sawmill, with a gray body and red-brown colored head plumage. In contrast to the middle saw, the brown color of the head of the female goose saw forms a sharp borderline to the light plumage of the neck. The chin and throat are white.

Goosanders are not particularly vocal birds. Two different courtship calls are known from the male, but both of them are quiet. With its beak raised it occasionally calls out auig-a and also emits a high- pitched, croaking and bell-like sounding roast-raw . The female responds to the male's courtship calls with a short aik-aik .

The food of the goosander consists mainly of smaller fish up to 10 cm in length. The prey is localized optically: In shallow water, the birds swim on the surface with their heads under water, in deep water they dive down to 10 meters. With their hooked beak and saw teeth, they can hold the fish tightly. A goosander eats around 300 g of fish a day.

Distribution of the Goosander:

The breeding areas are in Northern Europe, Northern Asia and North America. On the rivers on the northern edge of the Alps there is a small population of goose saws breeding there. In the far east of Russia, the goosander has been expanding its range in recent years. With this, however, it is increasingly becoming a nesting site competitor of the rare and threatened scaled saw . In winter the goose saws move to ice-free waters, mostly larger lakes rich in fish . In the southern parts of the distribution area, however, goosanders are resident birds or line birds .

The goosanders prefer clear, fast flowing rivers with gravel bottoms , lakes and coasts with trees. In contrast to the middle sawsers, goosanders are mainly freshwater birds . 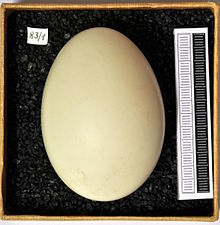 A female goosander carries five chicks on her back

The boys are already good swimmers and divers

Goosanders are cave breeders . Possible v. a. Hollows in trees, but also crevices in the rock, underwashing of banks, attics etc .; artificial nest holes are gladly accepted (entrance hole diameter 12 cm). The cave is padded with down. The female lays around 7 to 14 cream-colored eggs from April and incubates them alone for 32 to 35 days. The drakes usually leave the breeding area at this time and begin to moult. Goose saw chicks leave the nest one day after hatching. This is sometimes not entirely unproblematic if the brood cavity is at a greater height. The boys use their wing stubs as parachutes when jumping out of the cave. The female then leads the young to the water and looks after them for the next few weeks. A goosander family often covers distances of several kilometers during this time. At first, the female occasionally transports the chicks on her back. The young can swim very well right away, soon dive too and look for their own food right from the start. At first this consists more of aquatic insects and worms, hardly any fish. Most of the time the young are abandoned before they can fly. Goosanders become sexually mature in their second year of life.

In Germany, goosander populations have recovered significantly after a hunting ban was issued in the second half of the last century. The goosander is currently only on the early warning list of the Red List of Germany's breeding birds. In Europe there are around 60,000 breeding pairs, in Finland around 25,000, in Germany around 950–1,100, including around 420–550 in Bavaria . In winter there are 40,000 to 80,000 goosanders in Poland and 30,000 to 45,000 in Germany.

The goosander is mainly endangered by river barriers, water pollution and disruptive leisure activities. Despite the year-round closed season, it is still shot, clutches and nesting boxes are destroyed. A natural enemy is the pine marten , which can invade the nesting holes. The availability of breeding caves is also a stock limitation, because natural forests with old trees close to water bodies have become rare; artificial breeding caves can help here.

A research team that, on behalf of the British environmental authority and the RSPB, examined the future development of the distribution of European breeding birds on the basis of climate models, assumes that the goosander will shift its range significantly to the north by the end of the 21st century. According to these forecasts, it will shift in a northerly direction to Spitsbergen and Novaya Zemlya , while today's breeding areas in southern Sweden, southern Finland, Poland and the Baltic states no longer offer suitable habitats.

Like the other fish eater, gray heron , cormorant , great crested grebe and kingfisher , the goosander is not welcomed by fishermen and anglers. In Bavaria and Switzerland, fishing associations are calling for the protection of the goose saw to be restricted and for hunting or deterring them instead . The fish population in a body of water is also influenced by other factors: B. reduces the construction of the riverbanks protected against predators and substrate suitable for spawning and hinders the spawning courses necessary for reproduction.

The goosander prefers natural waters anyway, in which he will hardly be able to exterminate a species of fish. Whenever a disturbance of the natural balance is really found, one can intervene in a gentle way by removing artificial nest cavities.

After several years of (association) political debate, an investigation was carried out by the Bavarian State Fisheries Association in cooperation with the Bavarian State Ministry for Agriculture and Forests and the Technical University of Munich on the Ammer . When comparing stretches of water with and without dismay, the grayling population in the route with dismay was five times higher after two years .

However, acoustic deterrence is controversial because of the simultaneous impairment of all other water birds.

Male goosander of the subspecies americanus 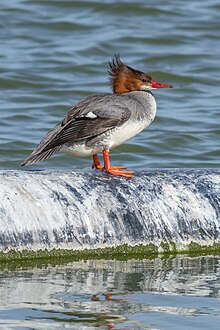 Female goosander of the subspecies americanus