Günding is a district of the Bergkirchen municipality in the Dachau district .

Günding is about two kilometers west of Dachau on the Amper and the Maisach , which converge here. The Dachauer Moos begins south in an elevated position on a tongue of the Danube-Isar hill country . The district is called Gündinger Moos. After Breitenau in the West is 1.7 kilometers. Breitenau and Ried are two kilometers away in the north and Neuhimmelreich is also around two kilometers in the south . To get to the Autobahn 8 with the Dachau-Fürstenfeldbruck junction, drive in a south-west direction for about four kilometers on the state road ST 2339, which connects Dachau with the B 471 in the direction of Ammersee. The district road DAH 5, which connects Mitterndorf with Bergkirchen, runs through the northern district.

The district of Bergkirchen has about 1,200 inhabitants.

Günding stands on ancient settlement land. This is indicated by two stone axes from the Neolithic Age (approx. 4000 BC) that were found in the Gündinger Moos. The first written mention is likely to be a document from 1140, in which a "Heinrich von Gundingen" is mentioned. The Gündingen Church was mentioned in an early document in 1315 as the " Church of Gundingen ". Günding is also mentioned in the Historical Atlas of Bavaria: "In 1337, the Fürstenfeld monastery was given the village court over two farms that Rapot the Eisenhofer had given it as a gift by Emperor Ludwig the Bavarian Pellheimers mentioned: In Günding church horse races were held every year on the feast of St. Sebastian (January 20th) after the Thirty Years' War .

Until the regional reform in the 1970s, Günding formed an independent municipality together with the neighboring village of Mitterndorf . On May 1, 1978, the community of Günding was dissolved and incorporated into the newly created large community of Bergkirchen, Mitterndorf came to the nearby town of Dachau. 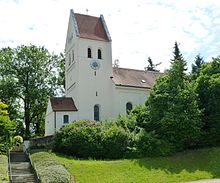 Sons and daughters of the district

Günding has a larger industrial park with several companies.