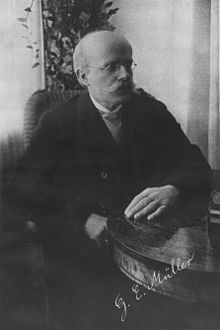 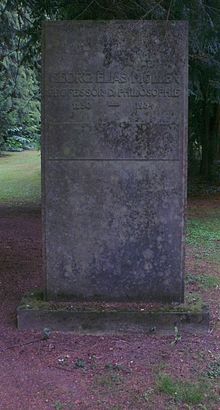 Müller was the second son of Pastor August Friedrich Müller and his wife Rosalie Zehme. After graduating from high school, Müller first studied philosophy and history for two years at the universities of Leipzig and Berlin before volunteering as a supply soldier for the Prussian elite regiment "Alexander".

After his return he spent another semester in Leipzig under the supervision of his mentor Moritz Wilhelm Drobisch , before he moved to Rudolf Hermann Lotze at the University of Göttingen in 1872 . There he heard u. a. Lectures by Gustav Theodor Fechner and Hermann von Helmholtz until he finally received his doctorate in 1873 .

In the summer semester of 1880, Müller was appointed to the University of Chernivtsi , initially as an associate professor of philosophy, and from October 1880 as a full professor. In the summer semester of 1881, Müller returned to the University of Göttingen, as the successor to Rudolf Hermann Lotze on the chair of philosophy. There he founded the psychological institute - the second in the world after Leipzig - in 1887, which achieved great importance in experimental psychology .