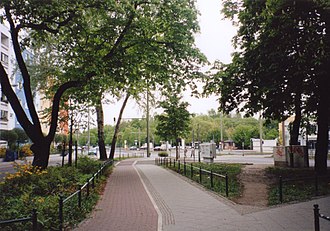 A 17-meter-high hill in the Berlin district of Köpenick near the Salvador-Allende district was popularly referred to as Schwefelberg . It was a chemical waste survey that was removed in 2005. In the 19th century, the Nitritfabrik AG, chemical factory for nitrate production, stored its waste here.

During the Second World War, a flak position for three guns was installed on the top of the Sulfur Mountain . The system was sunk around two meters into the mountain and was open at the top. Only the connecting passages between the individual gun compartments were covered. The gun compartments were each laid out like a quarter piece of cake (right angle facing west and the arch facing eastwards out of town). All three gun emplacements were lined up in a north-south direction and connected by a trench passage with an exit in the north. The side walls of the entire position were concreted . In the course of the conversion to a park, the position was then probably filled in.

The mountain, located near the intersection of Müggelheimer and Pablo-Neruda-Straße, was a popular meeting place for schoolchildren in the area and was used as a toboggan hill in winter . In the GDR era, a park was built on the mountain, which fell into disrepair after the political change and was later closed.

At the end of the 1990s, there were plans to redesign the hill into a park. During the preparation, however, groundwater pollution was determined during measurements . In 2005 the contaminated soil was removed and with it the mountain. Hundreds of trees were felled on the 11,000 m² site. The costs of the renovation amounted to around 1.5 million euros . They were borne by an investor who took over the property and built a consumer market there.

The nearby street 'Am Berg' was named after the sulfur mountain.