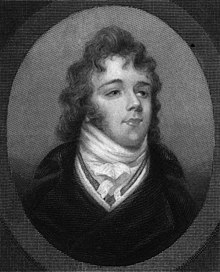 Brummell was the son of the politician William Brummell. The family belonged to the middle class, but the father had the ambition to enable his son a social advancement. Brummell was trained at Eton and then attended Oxford University , which he left after a year at the age of sixteen. In 1794 he joined the 10th Cavalry Regiment (Prince of Wales's Own) Regiment of (Light) Dragoons as the youngest officer . Here he made the acquaintance of the Prince of Wales , later King George IV, who remained connected to him even after Brummell left the army in 1796.

Brummell fell out of favor with the English crown prince in 1811, but remained a member of elegant social circles. In 1816 he fled to France to avoid guilty prison. While he promptly settled gambling debts as "debts of honor", his other debts amounted to several thousand British pounds . In the following years, with the help of friends, he briefly became the English consul in Caen . To his disadvantage, the post was abolished.

Brummell died penniless in Caen in 1840.

Brummell is one of the first dandies . According to his own statements, it took him five hours to get dressed. He preferred elegant clothes and beautiful scarves . One particularly extravagant detail was that he recommended polishing boots with champagne . Nevertheless, he was a representative of the fashionable understatement . He preferred muted colors and made modern men's suits with long trousers and straight jackets socially acceptable. He helped the tie to become widespread. He also invented the starched shirt collar .

His life served as a template for the play Beau Brummell by Clyde Fitch from 1889. Based on this template, two film adaptations followed, first a silent film in 1924 and then a remake in 1954 under the title Beau Brummel - Rebel and Seducer with Stewart Granger in the main role and Peter Ustinov as Crown Prince Georg. In total, Brummell's life was filmed at least four times. Ernst Penzoldt was inspired by the biography of the dandy for his play So Was Herr Brummell , which premiered in 1934 at the Vienna Burgtheater with great success. In literature, the life story of Beau Brummell was illuminated in an essay by Virginia Woolf in 1929 .