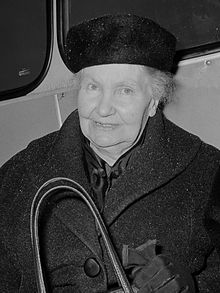 Gertrud Kurz , known as the refugee mother or mother Kurz (born March 15, 1890 as Gertrud Hohl in Lutzenberg in the canton of Appenzell Ausserrhoden ; † June 26, 1972 ) founded and directed a Swiss refugee relief organization.

Kurz was the daughter of a textile manufacturer. She grew up in a middle-class family and after finishing school attended the business school in Neuchâtel . Her parents enabled her to develop further at a women's training school in Frankfurt am Main to prepare her for a housewife role. In 1912 she married Albert Kurz, who was the rector of the Progymnasium in Bern . In the first years of their marriage, she devoted herself almost exclusively to her family. Between 1913 and 1921 she gave birth to two sons and a daughter. At the same time, she began to get involved socially: Her house in Bern became a contact point for beggars and tramps. In 1930 she had first contacts to the international peace movement of the "Crusaders" founded by Etienne Bach and became an active member of it.

With the outbreak of the Second World War , the international activity of the "crusaders" was interrupted. However, Gertrud Kurz saw an opportunity to continue this peace work in the work for refugees. In 1938 she spontaneously organized a Christmas party for all refugees in the city of Bern. This resulted in its own aid organization: the "crusader" refugee aid. The relief organization she set up developed in an informal way. At first it worked entirely on a private basis. Gertrud Kurz received refugees in her house and gave information over the phone. The "Crusader" refugee aid quickly became a collection point for all those people for whom other aid organizations did not feel responsible. The main components of the relief work were material aid, immaterial aid - in the form of interventions with the authorities - and public relations.

At that time she published articles about the refugee situation at the time in the print media and in the "Kreuzritter" bulletin. More and more volunteers volunteered to support Gertrud Kurz free of charge. Further aid organizations were set up in Basel , St. Gallen , Zurich , Geneva and Lausanne . In 1941, the "Crusader" refugee aid was connected to the Swiss Central Agency for Refugee Aid and thus more closely integrated into the general Swiss aid network, but remained a private aid agency financed through lecture collections and donations.

During the Second World War, Gertrud Kurz received up to 30 letters and various visits from people seeking help every day. This direct confrontation with the fate of persecuted people made her feel deeply concerned. In her auxiliary work she was guided primarily by religious charity. She was very open to all refugees. It was important to her to offer these people a family replacement in order to create a place of love and security for them. She could hardly delineate the demands of refugee work and could be reached almost day and night. Refugees expressed their thanks in numerous letters for their “generosity, charity and sacrifice”. She was called "Mother Kurz" by the refugees, but also by members of the authorities and friends.

The following characteristics stand out in their intervention style. Kurz approached the representatives of the authorities directly, argued in a very concrete and practical way and appealed to humanity. Because of her way of describing the cases, she primarily relied on effects in the emotional area. However, Gertrud Kurz never intended to confront the authorities, but rather signaled loyalty to the officials and did not question their authority. In persistent personal conversations, she broke the political resistance of Federal Councilor Eduard von Steiger against the admission of Jewish refugees. Thanks to the good contacts with the authorities, she gained widespread acceptance and enormous prestige. She was an important contact person for people like Karl Barth , as well as for Paul Vogt and Adolf Freudenberg , both of whom also ran aid organizations, and she also received helpful information. After the Second World War, Gertrud Kurz continued to be active in helping refugees; the "crusader" movement called itself Christian Peace Service and continues to this day.

In 1958, Gertrud Kurz was the first woman ever to be awarded an honorary doctorate by the Theological Faculty of the University of Zurich . Another award followed in 1965 by the Queen of the Netherlands with the Albert Schweitzer Prize. The Swiss Federal Council had also proposed her for the Nobel Peace Prize. In 1992 the Federal Mint issued a 20-franc commemorative coin in honor of Gertrud Kurz.

Gertrud Kurz was buried in Bern's Schosshaldenfriedhof , her grave has since been lifted.

Two years after Gertrud Kurz's death, people from her circle of friends and well-known personalities such as Alfred A. Häsler and the theology professor Hans Ruh founded a foundation in which their ideas should live on. Today's Gertrud Kurz Foundation tries to implement the spirit and values ​​of Gertrud Kurz in a contemporary way. It uses donations to support niche projects that increase the opportunities for participation of migrants, publishes short news twice a year and promotes a critical examination of Swiss migration and asylum policy.