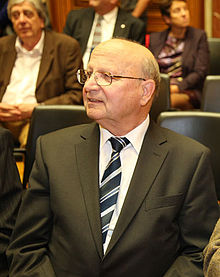 Gerulf Stix passed his Matura at the commercial academy in Innsbruck in 1953 . He then studied economics at the Universities of Innsbruck and Frankfurt am Main . During his studies he became a member of the student association VDSt Innsbruck . After receiving his doctorate in 1957, he worked for various companies in Germany and Austria. Since 1963 Stix was an honorary functionary of the FPÖ Tirol , from 1973 to 1985 he was regional party leader of the FPÖ in Tirol and a member of the federal executive committee. From 1971 to 1990 Gerulf Stix was a member of the National Council of the Republic of Austria. 1983–1990 he was the third president of the National Council .

In 1996/97 Stix was one of the founding members of the right-wing network “ Voice of the Majority ”.