Logo on girocards and at points of acceptance

Girocard ( own spelling girocard ; colloquially EC for Electronic Cash ) is a common framework for the German debit payment system and the German ATM system .

The name and the Girocard logo were introduced in 2007 by the Central Credit Committee (ZKA; today Die Deutsche Kreditwirtschaft ) by renaming the former debit card . While the name ec-Karte is still very well known, the knowledge that this payment card has been renamed and Girocard is the successor system has not yet caught on with the majority of the population.

Cards with the “Girocard” or “Electronic Cash” logo are only issued by credit institutions , usually in connection with a current account . The card payment is made by entering the PIN ( personal identification number ) by the card holder at the POS terminal .

The Girocard procedure is a purely German procedure that is not supported abroad. Similar, but internationally widespread debit card systems are Maestro and V Pay . As a rule, Girocard cards are also equipped with Maestro or V-Pay functionality by the issuing credit institutions in order to enable payments and withdrawals abroad. These combined cards can be recognized by the additional Maestro or V-Pay logo on the card.

The Girocard is very widespread in Germany. According to a study by the market research institute GfK in July 2015, 95% of citizens had a girocard, and a total of over 100 million cards were in circulation. 75% of the cardholders used the Girocard for cashless payment in retail.

In 2015, almost 2.6 billion transactions with a total turnover of 138 billion euros were carried out with the Girocard. According to a study by the Deutsche Bundesbank on payment behavior in Germany from 2014, around 15% of all payments were made with the girocard (which made around 30% of total sales); This made the Girocard the second most important payment instrument after cash. By comparison, credit cards only generated around 4% of sales; other debit card systems were of no importance.

Girocard is intended to guarantee the safe and easy use of debit cards using the personal identification number (PIN).

The European banking industry has meanwhile introduced the European Payments Area (SEPA). The aim of SEPA is to give all citizens the opportunity to carry out payment services in the euro area under the same conditions as in their home country. Girocard is primarily intended to facilitate the international acceptance of German debit cards in the course of creating a uniform logo for the SEPA.

In a transition phase, the “ec electronic cash” pictogram can still be found on debit cards of the German credit industry and at POS terminals as an acceptance symbol. This symbol was used for the transition phase from Eurocheque (paper-based payment by check) to payments with an EC card (card-based payment with PIN). After the Eurocheque procedure was abolished, the issuing of EC cards by the German credit industry was discontinued and the trademark rights to Eurocheque were sold to Mastercard. The

The logo or the “ec” label can sometimes be found on Mastercard debit cards, but they do not have a Girocard payment function. The reason is that the name and logo are owned by Mastercard and the credit card company uses the brand, which is still very well known in Germany, for its “Debit Mastercard” for marketing reasons.

A girocard is usually combined with several services, including a. with a rechargeable GeldKarte , the Maestro or V Pay function for using the card abroad. 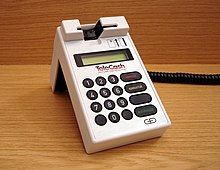 A card terminal (also: dealer terminal or EFT POS terminal ) is made up of hardware and software components. The main components in the hardware area are the security module , the PIN pad , the printer, the display , the magnetic stripe card reader , the chip card reader as well as the communication module and the power supply.

The software mainly consists of the operating system , the communication software, the software of the security module and various software modules for OPT , EMC and additional applications (prepaid, customer loyalty systems, remote maintenance). The most important element here is the so-called safety module. Without this, the terminal is only suitable for electronic direct debit (ELV).

All card terminals using the girocard procedure must be certified by the Deutsche Kreditwirtschaft for participation in cashless payment transactions. Terminals that exclusively support the ELV do not require certification by the DK. The operation of a card terminal requires a provider contract with a network operator. The provider (technical network operator) carries out the further processing of the data collected by the terminal. The commercial user (business owner, dealer) is looked after by a service provider (commercial network operator) while the terminal is in use, can use a hotline, receives technical support and warranty services from on-site technicians and has a contact person for questions about billing, transaction controlling, contract management, etc. .

Card terminals have a unique Terminal Identification Number (TID). Providers have centrally assigned number ranges for their devices with which the TID begins:

In July 2012 it became known that due to a security gap in a reader device that is widely used in retail, the card data including the personal identification number (PIN) could be spied on via the computer network and used for criminal purposes. The security hole uses a memory overflow that can typically be exploited with technologically outdated software with low type security . The provider of the payment services VeriFone wants to close the security gap by updating the software.

Each payment card is usually provided with a magnetic strip . The magnetic stripe is only read and therefore only contains static information. From 2000, more and more banks in Germany equipped the newly issued cards with an additional chip, the EMV chip. In 2008, 70% of the cards issued had a chip. The chip can calculate like a small computer and answer queries without being able to (completely) read its content. Magnetic stripes can be easily copied, whereas chips cannot. In order to maintain downward compatibility, especially with the mostly integrated Maestro card, the cards still have magnetic strips. Payment centers that can handle both types of communication generally choose the more secure one via the chip. The approval ordinance TA (Technical Annex) 7.0 of the DK introduced that the chip must be used if a chip is available. Since 2011 it is mandatory to use the chip for the electronic cash procedure.

A card's magnetic stripe has three tracks. Track 3 of the magnetic stripe for payments was read in Germany until September 30, 2009; it was used for the electronic direct debit. Since then, the internationally common track 2 has been read out.

The Federal Criminal Police Office asks the banks to issue cards without magnetic stripes as standard and only customers who use their EC cards outside of Europe to issue a card with a magnetic stripe.

A guaranteed payment at a POS terminal (Point Of Sales) works as follows:

The main feature is the online authorization of the payment. During the online authorization, the card used is checked against a block file, the entered PIN is checked for validity , the entered payment amount is compared to the available amount (credit plus overdraft minus reserved debits) of the account holder. If one of the points mentioned is checked negatively, the payment will be rejected. Authorization and checking of account coverage and compliance with the daily limit are carried out by the computer center of the card-issuing institute.

General procedure for a Girocard payment using the magnetic strip:

General procedure for a "girocard" payment using the chip:

Steps three to six can be omitted if the card is configured accordingly and as soon as the credit limit stored on the chip has not yet been exhausted. As a result, line costs are not incurred with every payment process and, in particular, the payment process is often greatly accelerated, since no online connection has to be established. The bank grants its customers a loan in addition to the overdraft facility.

The costs of a Girocard payment depend on the amount to be paid. For the retailer, they amount to a maximum of 0.2% of sales. In addition, there are costs for the technical provision, which are charged by the respective network operator.

The merchant terms and conditions for participation in the ec system once provided that the merchants had to “accept the cards at cash prices and conditions”, that is, the merchants would bear the fees and, when paying with Girocard, only give the customer the cash price of the goods or service. In retail, it is still common today that amounts can sometimes only be paid with the card above a certain amount (e.g. 10 or 15 euros). Since November 2014, payment guarantee fees have been negotiated between card issuers and merchants in a market-oriented process. New dealer conditions also apply. Furthermore, the new terms and conditions allowed companies to grant discounts or add a surcharge to the cash price or any cash payment amount. However, such a mark-up had to be reasonable and based on the company's real costs. Since January 13, 2018, any fees and surcharges for payments with debit and credit cards, including the Girocard, at the expense of the buyer have been prohibited by an EU directive implemented in national law.

Postings on account statements are usually shown as follows:

There are the following authorization features, each of which indicates the technology used to authorize the payment:

Geldkarte and Girocard offer the card-accepting merchant a payment guarantee, ELV payments, on the other hand, are not guaranteed and are therefore associated with a potential risk of default .