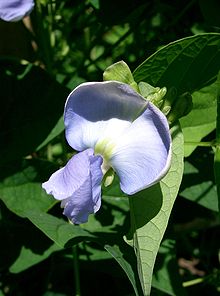 The Goa bean ( Psophocarpus tetragonolobus ), also called wings bean referred to, is a crop plant in the sub-family of papilionaceous (Faboideae) from the family of the Leguminosae (Fabaceae or Leguminosae).

The goa bean is a richly branched, left-hand winding, perennial , herbaceous plant . But it is mostly grown as an annual plant . The roots form tubers as storage organs. The leaves are pinnate in three parts. The partial leaves are slightly obliquely egg-shaped, 5 to 14 cm long and 3 to 9 cm wide, pointed, entire or occasionally lobed.

Only occasionally are the flowers solitary, mostly they are axillary on 2 to 10 cm long inflorescence stalks in dense racemose inflorescences . The zygomorphic flower is relatively large with a length of 2 to 5 cm. The crown is yellow-pink or purple in color. The flag is usually upright and 2.5 cm wide.

The legumes are 10 to 20 cm long, along the seams are two wavy wings with a width of about 5 mm. The legumes contain between five and 20, up to a maximum of 40 seeds. The round-oval seeds have a diameter of 7 to 8 mm. The hilum is light to cream in color with a dark border.

Natural occurrences of the goa bean are unknown, their origin is believed to be in Asia , the Mascarene Mountains or Madagascar . This species is widespread in culture.

The plant parts are used in a variety of ways, both the young fruits, the ripe seeds and the underground tubers are edible. Fatty acids are extracted from the seeds . 100 grams of dried goa beans contain an average of 3.3 g saturated, 5.8 g monounsaturated and 3.7 g polyunsaturated fatty acids in their 16 g fat portion. The oil from the seeds is used, among other things, to make soap. The seeds have a high nutritional value, which can be compared to the soybean .