The golden breast ( Amandava subflava ) is an African species from the finch family . It inhabits large parts of sub-Saharan Africa and inhabits savannas, grasslands or reeds near the water. Several subspecies have been described. 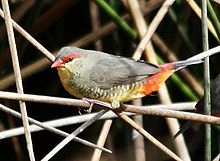 Golden breasts are about nine to ten centimeters tall and are the smallest of the African finches. It is named after the yellow to red-orange color of the breast, belly and lower tail covers.

The male has a black rein. The stripe above the eyes , the rump and the tail-coverts are red. The skull, neck, back and wings are greenish gray. The tail is black, with the two outermost tail feathers being variably lined with white. The sides of the body are dull yellow stripes. The under tail-coverts are orange-yellow, the rest of the underside of the body golden-yellow to rich lemon-yellow. The beak is red with a black ridge.

The females are a little more dull in color than the males and they lack the red eyebrow stripe. The yellow on the underside of the body is noticeably paler. The female's eyes are reddish brown. The young birds are browner overall. They have neither a red eyebrow stripe nor red on the rump or on the upper tail-covers.

Golden breasts are African finches that inhabit this continent south of the Sahara . The distribution area extends from Senegal via Guinea-Bissau and Liberia eastwards through the West African states to Ethiopia and Yemen . In a southerly direction there are gold breasts from southern Somalia and southern Kenya to the eastern half of South Africa . Within this distribution area, four subspecies are distinguished, which differ slightly in their appearance.

Similar to the Australian rushes , the golden breast lives in swamp areas and in reed, papyrus and grass fringes along various types of water. It also occurs in mountainous areas, in the dense vegetation of low- lying forests or in Zimbabwe in the hyparrhenis grasslands. When foraging for food, it flies far into dry grasslands or burnt-out areas and fields. It has also opened up for human settlement and is often found on the edge of villages. In Johannesburg , where artificial or natural bodies of water are surrounded by reeds or tall grass, they can also be found on the outskirts of the city. The height distribution of the golden breast reaches from the lowlands to altitudes of 2,400 meters (Ethiopia).

During the breeding season it lives in pairs or in small family groups. Outside the breeding season, it can be observed in small groups of up to twenty individuals, but occasionally it forms larger swarms with other fine finches. They are very agile birds that are constantly on the move. Their diet consists mainly of small seeds and small insects. The song is a monotonous series of ziep calls, which can also be heard by the females and the young birds. It also has a number of other calls.

The breeding season varies depending on the distribution area and usually falls at the end of the rainy season and the beginning of the dry season. At least in the south of their range, gold breasts do not build nests themselves, but use the abandoned nests of other bird species for breeding. It is often the nests of oryx weavers . Evidence is also the nest use of species as Cistensänger , Schildwida , Spiegelwida , Samtwida , flames Weber , red-billed weaver , Big Gold Weber and thick-billed weaver .

Because of similarities in plumage, nesting behavior and habitat claims the Orange-Breasted Waxbill is next to the Tigerastrild and the green avadavat in the genus Amandava arranged. Some authors put the species in the monotypical genus Sporaeginthus .

Like the tiger finch , gold breasts are closely related to the quail deer . Proof of the close relationship is the throat drawing of the young birds, which consists of a striking pattern of six points. The begging behavior of all three types is also the same.

There is no exact documentation since when gold breasts have been kept as cage birds in Europe. Similar to the zebra finches , however, they are one of the most popular species among the fine finches. They are extremely resilient and long-lived, and keeping them for six to seven years is not uncommon. They are also considered to be very easy to breed. Gold breasts need animal feed such as animal feed to raise their young. B. "Buffalos" (larvae of the grain mold beetle) or "Pinkies" (frozen fly maggots).