from Wikipedia, the free encyclopedia
This is the spotted version , flagged on June 26, 2019 . There is 1 pending change that has yet to be viewed.

Guinea is a historical term for the southern part of West Africa . The various states that have "Guinea" in their name are named after this region. 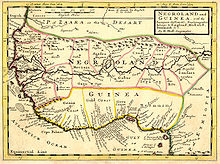 The West African coastal region (blue) is referred to as Guinea on this map of Africa from 1812 , to the south of it extends a region marked in red and pink, but unspecified

The name is derived differently. Often reference is made to the Berber expression aginaw , which means "land of the blacks" and which came into the European languages via Portuguese as Guinea ; there are also references to a derivation from a name for the historical empire of Ghana or for an origin from the Latin genu for "knee" as the name of the arch of the African coastline.

There is no single definition of the Guinea region. The use of the term depended and depends on the respective historical and linguistic circumstances. In traditional German-speaking geography, it is understood to be a crescent-shaped strip up to 500 km wide and 6,000 km long, which extends along the Atlantic coast from Senegal in West Africa through parts of Central Africa to Angola in South West Africa . In international (generally English-language) literature, it is more common to only refer to the coastal region from Senegal to Cameroon as Guinea. 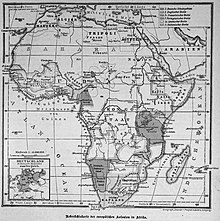 According to the traditional German definition, the Guinea region stretches from Senegal to Angola. It therefore covers the entire coastline of the Gulf of Guinea and its hinterland. According to this definition , the area between Senegal and Cameroon is called Upper Guinea , the rest to Angola is called Lower Guinea . While Upper Guinea, which is determined by the Upper Guinea Sill , has a broad coastal strip, the coast of Lower Guinea, which is determined by the Lower Guinea Sill , is rather narrowly structured; both sub-regions have tropical rainforests and savannahs . The following countries are partly or wholly in the greater Guinea landscapes:

The two largest rivers in the Guinea region are the Niger (in Upper Guinea) and the Congo (in Lower Guinea).

Outside the German-speaking area, it is less common to assign the countries south of Cameroon to the Guinea region. "Guinea" is limited to what is called "Upper Guinea" according to the above definition. This can sometimes lead to confusion: In the English-language literature historically the " Upper Guinea Coast " only refers to the coastal strip from the mouth of the Gambia to Cape Mount , i. H. Parts of the states of Gambia, Senegal ( Casamance ), Guinea-Bissau, Sierra Leone and Liberia.