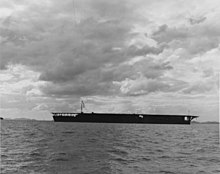 During the First World War , the Japanese naval command studied intensively the aircraft mother ships and early aircraft carrier conversions of the Royal Navy (e.g. Furious ) in order to gain knowledge for building up their own naval air force . The result was the decision to put the first aircraft carrier on the keel immediately after the end of the war. For this purpose, the hull of the Hiryu fleet tanker, which had just begun, was selected and built as an aircraft carrier.

The Hōshō was put into service on December 27, 1922. This happened around thirteen months before the commissioning of the Hermes , the first carrier of the Royal Navy , which had already gone into planning before the Hōshō .

Since the Hōshō was the first ship of its kind, it was mainly used to develop carrier-based warfare and tactics for the Japanese Navy in the 1920s.

The flight deck of the Hōshō had been lowered in front to support the take-off of the aircraft. On the starboard side there was a superstructure and three funnels that could be swiveled outboard while the aircraft was in use. After a few test drives, the structure was removed again and immovable exhaust ducts installed, which expelled the smoke downwards at an angle under the starboard edge of the flight deck, which led to an improvement, since flight operations were much less affected by clouds of smoke.

The Hōshō drove missions during the Battle of Shanghai (1932) and the Second Sino-Japanese War .

The design of the Hōshō had been overtaken by other models at the beginning of the Pacific War . It was too small and too slow. The latest fighter planes such as the Japanese fighter Mitsubishi A6M , called Zero, found no space on it. Nevertheless, she was involved in the Battle of Midway in early June 1942 with a small air fleet in support of the Kidō Butai .

The Japanese designers tried to bring the Hōshō up to date with the latest technology, as every operational aircraft carrier was urgently needed. However, lengthening and widening the flight deck along with the overhang led to instabilities and poor handling on the high seas. After 1943, the porter was relocated to the Japanese inland sea and served there for training and exercise purposes. It was slightly damaged in American air raids on Kure in July 1945. This made it one of only four Japanese aircraft carriers that survived the Pacific War.