The Hallgrims Church in the backlight.

The Hallgrímskirkja [ ˈhatl̥krimsˌcʰɪr̥ca ] ( Icelandic Hallgrímurs Church ) is an Evangelical Lutheran parish church of the Icelandic State Church in the capital Reykjavík , the largest church building in Iceland and the second tallest building in the country after the Smáratorg Tower . The church is the sixth largest structure in the country.

Planning work for Hallgrímskirkja began in 1929 and construction in 1945. The crypt under the choir was consecrated in 1948. The church tower was completed in 1974. The nave was not completed until 1986 . 60 percent of the construction costs were raised through donations.

The church was named after the Icelandic hymn -Dichter Hallgrímur Pétursson named (1614-1674).

The building was designed by the state architect Guðjón Samúelsson (1887–1950). He submitted his draft in 1937. The exterior appearance is dominated by the expressionist style, similar to the Grundtvig Church in Copenhagen , which was completed in 1940. What is striking is the similarity of the concrete pillars, which are lined up in large numbers around the Hallgrímskirkja tower, with basalt columns, a common motif in the Icelandic landscape. The white color is supposed to be reminiscent of the glaciers.

The interior of the church, on the other hand, is designed as a conventional, three-aisled hall church with numerous Gothic features, such as ribbed vaults and pointed arched windows . The outer aisles of the basilica largely recede from the broad nave. The very bright interior of the church is achieved by largely dispensing with stained glass windows and behind the main altar you can unusually see the sky and clouds through additional windows.

Due to its dominance, Hallgrímskirkja is a landmark that can be seen from afar. Seen here from the Perlan .

The Hallgrímskirkja was placed on a hill in the city, which makes its 74.5 meter high tower appear even larger. It thus shapes the entire cityscape of Reykjavík.

In front of the church and in its central axis is a statue of Leif Eriksson , which was donated by the United States in 1930 for the 1000th anniversary of Althing Island and created by the American sculptor Alexander Stirling Calder .

1929 was planned, the steeple at the same time as a transmission tower for broadcasting use. Today it can be accessed with the help of a lift. From the viewing platform - directly below the belfry - there is a broad view of Reykjavík and its surroundings. The tower has three large bells and a carillon with 29 bells. 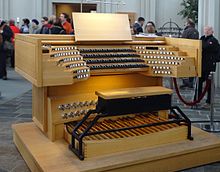 In December 1992 the church's large concert organ was inaugurated, built by Johannes Klais Orgelbau in Bonn . It has a mechanical console with four manuals and pedals , 72 registers and 5275 pipes . The organ is about 15 meters high and weighs 25 tons. It is by far the largest organ in Iceland and, in addition to its role in church services, is also used for concerts. A second gaming table was installed in the nave in 1997. The project was u. a. also financed by pipe foundations. The visible organ pipes of the impressive prospectus , the front, are dominated by the side pedal pipes with a length of around 10 meters. The solid church stalls were installed parallel to the organ building. Some of the seating is flexible so that it can be converted for concerts that require a larger cast or an orchestra. The church organist has been Hörður Áskelsson since 1982 .

The parish has around 7,000 members and has two parish offices. One of them is that of the Dean of Reykjavík-West. The church council has seven members.