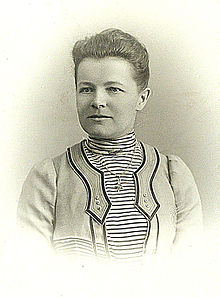 She was born in the eastern province of Posen (today Trzcianka , Poland) and studied at the Prussian Academy of Arts in Berlin under Paul Flickel , Ludwig Dettmann and Walter Leistikow , whose works had a strong impact on her artistic work. In 1919/1920 she attended a preliminary course with Johannes Itten at the Bauhaus in Weimar . In a style partially interspersed with Art Nouveau echoes, she created technically brilliant multicolored landscape woodcuts in addition to oil paintings .

Helene Maß was active in the Wandervogel movement. She was a member of the Berlin Secession , in whose first exhibition she already took part, and of the Reich Association of German Artists . From 1906 to at least 1953 she was a member of the Association of Berlin Women Artists , in which she was a member of the board from 1916 to 1930 and was secretary from 1933 to 1940. She taught woodcut at his drawing and painting school. She is an honorary member from 1940 to 1943. Helene Maß worked and lived at Joachimsthaler Strasse 27 in Berlin-Charlottenburg around 1906 , and from around 1913 on at Knesebeckstrasse 33 in the same district. In 1955 she died in Berlin-Dahlem .