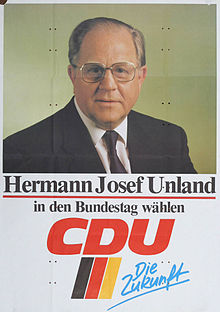 Candidate poster for the 1987 federal election

Hermann Josef Unland grew up as the son of a fine bag maker in Bocholt and attended high school there. Then he was drafted into the Volkssturm , took part in the Second World War and was finally taken prisoner.

After his release from captivity, Unland continued his school education. He was a high school and took in 1950 to study law, economics and political science at the University of Cologne in which he in 1955 with the graduation to the Dr. jur. and finished in 1957 with the examination to become a qualified economist. In Cologne he became a member of the Catholic student association Nibelung in the KV . During and after his studies he worked as a research assistant at Reich Chancellor a. D. Prof. Dr. Heinrich Brüning active. He then worked with interruptions in the private sector, was the managing director of the Federal Association of the Clothing Industry from 1967 to 1978 and was a member of the supervisory board of several insurance companies.

In 1946 he joined the CDU and was a co-founder of the Junge Union in Bocholt. 1966/67 he was deputy federal manager of the Christian Democrats. From 1981 to 1987 he was chairman of the CDU district association Borken .

He was also a member of the Parliamentary Assembly of the Council of Europe and the Assembly of the Western European Union (WEU) from 1981 to 1991 . In 1983/84 he was Vice-President of the WEU Assembly.

On November 9, 1989, the day the Berlin Wall fell, he spontaneously singed the German national anthem together with Ernst Hinsken (CSU) and Franz Sauter (CDU) during the session of the German Bundestag .

Since 1959 he had been married to Hildegard Pirlet, daughter of the structural engineer Josef Pirlet . The marriage had six children.

The grave of Hermann Josef Unland in the Münster Central Cemetery .