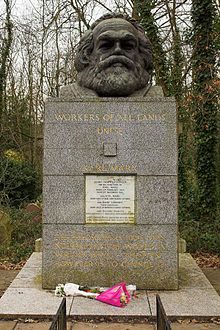 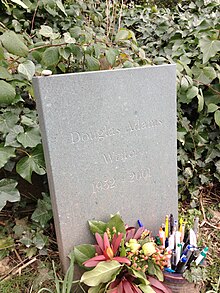 Highgate Cemetery is a cemetery opened in 1839 in what is now Camden in the British capital, London . It is one of the Magnificent Seven , a series of cemeteries that emerged around London over the course of ten years. Many exiles are buried in Highgate Cemetery, for example the German philosopher Karl Marx .

When the burial possibilities within London were exhausted in the 19th century, Parliament granted private entrepreneurs the necessary rights from 1832 to establish a total of seven commercial cemeteries in the then still rural London suburbs. The architect Stephen Geary then founded the London Cemetery Company in 1836 . The company acquired land on the hillside of what was then the village of Highgate , west of Swain Lane. Over the next three years, in collaboration with the garden designer David Ramsey and the surveyor James Bunstone, the site was equipped with exotic plantings and architectural features in order to become known as the most modern cemetery of the Victorian era . After its opening in May 1839, the cemetery gained increasing popularity. As hoped, it was above all well-off families who bought large grave sites on the high burial ground, which they had lavishly and monumentally designed.

The number of burials increased steadily, so that after almost twenty years the London Cemetery Company acquired the property opposite, east of Swain Lane. In 1856 the East Cemetery was opened, with 20 acres (about 7.5 hectares) laid out slightly larger than the west side with 17 acres. The first burial on the east side did not take place until four years after the opening. Up until then there were over 10,400 grave sites on the west side, and on some days there were up to thirty burials. There was a tunnel below Swain Lane through which the coffins were transferred from the chapel on the west side to the east side. The hydraulic lift used for this was housed in an extension of the chapel.

At the beginning of the 20th century, however, there was a decline. The burial culture changed, cremations increased; Smaller and smaller grave sites were acquired for burials, the design of which was now much simpler. Although many wealthy families had permanently secured the rights to certain grave sites, numerous graves were abandoned because the owners moved away, had no descendants or lost them prematurely, also due to the two world wars. With the sale of cheaper, ordinary graves, the cemetery company was no longer generating enough income to properly maintain the site. In 1960 the London Cemetery Company had to file for bankruptcy, and it subsequently merged with the United Cemetery Company. The much larger company was also overwhelmed with the maintenance of Highgate Cemetery, so that the cemetery had to close its gates.

It was not until 1975 that a turning point emerged with the establishment of a development association. The Friends of Highgate Cemetery (FOHC) bought the art-historically more interesting western burial ground in the late 1970s and thus saved it from being leveled by bulldozers. In 1981 both parts were finally fully owned by the FOHC. To support the maintenance of the cemetery, the visit is chargeable. The eastern burial ground is accessible daily, the western part can only be visited after registration as part of a guided tour.

Meanwhile, burials are taking place again at Highgate Cemetery. A grave site is sold around 30 to 35 times a year; however, the buyer must meet certain requirements.

The cemetery in north London consists of the older western and the slightly larger eastern part, which are separated from each other by a public road. Highgate West is dominated by numerous mausoleums , as well as large catacombs such as the Terrace Catacombs, which offered space for 825 coffins. Two chapels , one for members of the English official church , the other for members of other religious communities , are located in the western part in the same building. The predominant architectural style is the neo-Gothic , corresponding to the taste of the time , in addition, many examples of historicism and classicism can be seen. The entire complex is listed in a register of the state preservation authority English Heritage as a park of particular historical interest and international importance.

One of the most famous graves in the cemetery is that of Karl Marx on the eastern burial ground, who was buried here on March 17, 1883. His wife Jenny Marx , housekeeper Helena Demuth and daughter Eleanor Marx also rest in the grave . His originally modest tomb was renewed in 1956 by the Communist Party of Great Britain . It shows a portrait bust of Laurence Bradshaw and the words “WORKERS OF ALL LANDS UNITE” from the Communist Manifesto and the 11th thesis on Feuerbach : “THE PHILOSOPHERS HAVE ONLY INTERPRETED THE WORLD IN VARIOUS WAYS - THE POINT HOWEVER IS TO CHANGE IT “(The philosophers have only interpreted the world differently; it depends on changing it).

In the 1970s there was a fruitless attempt to destroy the monument with a self-made bomb.