The title of this article is ambiguous. Further meanings are listed under Highgate (disambiguation) .

Highgate is an area in North London on the northeast corner of Hampstead Heath .

Highgate is currently one of the most expensive residential areas in Greater London for the cost of living. The almost rural character of Highgate is protected by the Highgate Society .

Up until the end of the Victorian era , Highgate was a separate village outside London, on the main road leading north. There is still extensive green space in the area, including the eastern area of Hampstead Heath with three ancient forests, Waterlow Park and the east-facing slopes known as the Highgate Bowl.

Highgate itself is a collection of largely the style of Georgian architecture corresponding shops, pubs, restaurants and streets with residential buildings, among which numerous monuments are located, including the 1565 built Highgate School , Jackson's Lane in a classified in Grade II former church building, the inn Gatehouse built in 1670 and Berthold Lubetkins built Highpoint I and II in the 1930s . Highgate is best known for its Victorian cemetery, Highgate Cemetery , where Karl Marx found his final resting place.

Highgate is situated on a hill overlooking large parts of London and is at a maximum height of 114 m above sea level. 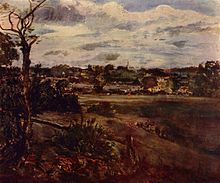 View of Highgate, painting by John Constable , from the first quarter of the 19th century

Historically, Highgate was in the vicinity of the hunting grounds of the Bishop of London . The bishop maintained a toll station at the point where the country road leading north out of London reached his lands. A large number of guest houses were built along the route, of which the gatehouse is reminiscent of the former toll station.

Dick Turpin was a mugger in the Highgate area in the 18th century .

Be in the Hampstead Lane and Highgate Hill from red bricks in Victorian style built building of Highgate School with the associated Chapel of St Michael. The school played an essential role in the development of the village. It is still today at the place where it was founded, with documents issued by Elizabeth I in 1565.

The area north of High Street and Hampstead Lane was part of the Parish of Hornsey and later the Municipal Borough of Hornsey , the seat of this borough being in Highgate for many years.

The first funicular railway in Europe was built on Highgate Hill , the steep road between Archway and Highgate . It was operated between 1884 and 1909.

Adjacent to the cemetery is the Holly Lodge Estate , which is one of only two such mansions built in the UK for a single woman; the property was the property and residence of Baroness Angela Georgina Burdett-Coutts . Between 1930 and 1939 Bridget Hitler , the wife of Adolf Hitler's half-brother Alois, lived with their son in Highgate. The former football player of Arsenal FC , Leslie Compton , owned a pub after his career in Highgate.

Peter Sellers lived as a boy in a cottage on Muswell Hill Road, where he was living with his mother when she sent him to St Aloysius Catholic Boys' School in Hornsey Lane.

In Victorian times, St Mary Magdalene in Highgate was a home for "fallen women", where Christina Rossetti worked from 1859 to 1870 . It probably inspired her most famous poem, Goblin Market .

In 1817 the poet and philosopher Samuel Taylor Coleridge came to Highgate to escape his addiction to opium in the home of Doctor James Gillman . Gillman built an annex for the poet, where Coleridge lived for the rest of his life. It was during his stay here that some of his most famous poems, including Kubla Khan , were published for the first time. His autobiographical Biographia Literaria appeared in 1817. He died here on July 25, 1834 and is buried in the crypt of St Michael's Church.

Highgate is a theme in film, music and theater. The gothic horror atmosphere of the cemetery provided the background for some of the hammer films of the 1970s. More recently, Shaun of the Dead (2004) and The Portrait of Dorian Gray (2009) were filmed here. A well-known pantomime theater scene is also set in Highgate. Dick Whittington and His Cat are characters in an English story that was adapted for the stage in 1605 and has become one of the most popular pantomime pieces since the 19th century. It is very loosely based on the historical person Richard Whittington , a medieval Lord Mayor of London . Dick, a boy from a poor family in Gloucestershire , went to London to make his fortune and is accompanied by his cat. There he has little success, however, so that Dick and his cat make their way home. Near Highgate Hill they hear the bells of St Mary-le-Bow ; Dick believes they are an invitation to him to repent and eventually become Lord Mayor of London. You are going back to London; Dick is successful and actually becomes Lord Mayor. Whittington Hospital on Highgate Hill is named after this, and a statue of Dick's faithful cat stands not far from it.

Highgate is known for its pubs . Other attractions include: