Finchley is a borough of London . It belongs to the London Borough of Barnet and is about eleven kilometers north of Charing Cross on a hill. Finchley was formerly a church ( Parish ) in the county Middlesex , was founded in 1933 to Municipal Borough collected and is since 1965 part of Greater London . Located on the outskirts of Greater London, Finchley is a suburban neighborhood with three town centers.

Finchley probably means "Finch's clearing" or "finches' clearing" in Late Saxon ; the name was first mentioned in the early 13th century. The area was owned by the Bishop of London in the 11th century .

In the early Middle Ages the area was sparsely populated and largely forested. During the 12th and 13th centuries the first farmers settled, so that in the 15th and 16th the forests in the eastern part of the Parish disappeared and Finchley Common was called. The medieval Great North Road was to the 19th century in the area of Commons than highwaymen ( Highwaymen equipped).

The parish church (St. Maria) was first mentioned in the 1270s. The Church End settlement developed around this church.

The station of Finchley at the Edgware, Highgate and London Railway (later Great Northern Railway ) was put into operation 1867th The Finchley to High Barnet branch opened in 1872. A tram was installed in 1905 and soon extended to Barnet. Later the trams were replaced by trolley buses .

In 1933, The Northern Heights Plan (as part of the New Works Program , 1935-1940) was announced. The line was electrified and integrated into the subway network, and a new connecting tunnel was to be built. East Finchley Station was demolished and rebuilt; the project was held up by World War II . Rail traffic was stopped between 1939 and 1940/41, after which the railroad was put back into operation because the army had built large barracks in the area.

After the war, the Northern Hights plan was abandoned with the introduction of the Metropolitan Green Belt .

By 1547 Finchley had a Parish assembly that was converted into a Local Board in 1878. In 1895 Finchley was converted to an urban district council with all other local boards , and in 1933 to a municipal borough . Finchley has been part of the London Borough of Barnet since 1965 .

From 1959 to 1992 Finchley was represented in the House of Commons by Margaret Thatcher . Finchley is now part of the constituency of Finchley and Golders Green .

In February 2010, the Green Party of England and Wales held its party meeting in North Finchley. 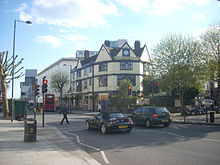 Finchley is located on a hill about 90  m high, 11 km north of Charing Cross and about 6 km south of Barnet . In the west, the Dollis Brook and its valley form the district boundary while the Mutton Brook forms the southern boundary at the confluence of which in the southwest of Finchley the River Brent is formed.

Finchley is geologically composed of three layers. A large part of Finchley lies on boulder clay , which is surrounded by a layer of gravel, the underlying layer of London clay also occurs. At the corners of this roughly triangular floor plan, three hamlets emerged, which developed into Finchley's three towns:

The residential areas called West Finchley are around the corresponding subway station , the same applies to Woodside Park .

The area of ​​London called Finchley Road and around Finchley Road (London Underground) of the same name does not belong to Finchley, but to a trading area in Camden . 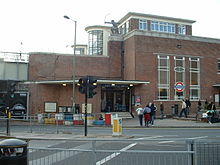 Transport for London operates four underground stations in Finchley , all of which are on the Northern Line's High Barnet :

Two city highways, North Circular Road and A1 ( E15 ) meet at Henly's Corner in the south corner of Finchley.

In North Finchley, at Tally Ho Corner, there is a bus hub with nine lines.

There are 17 primary schools in the district .

There are also secondary schools (grades 7 to 11). Of these, three schools are voluntary aided schools , all run by the Roman Catholic Church : Bishop Douglass School , Finchley Catholic High School, and St. Michael's Catholic Grammar School . The two public schools are Christ's College Finchley and The Compton School . The Wren Academy is named after Sir Christopher Wren and is supported by the Church of England .

The Oak Lodge Special is a special school.

Woodhouse College in North Finchley is on the site of the old Woodhouse Grammar School and is one of two Sixth Form Colleges in the borough.

The local football team Wingate & Finchley plays in the Premier Division of the Isthmian League . It was founded in 1946 as a Jewish club. 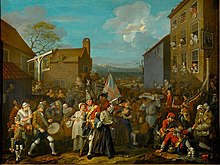 March of the Guards to Finchley

Finchley Borough had four twin cities, the partnerships were taken over by the London Borough of Barnet.