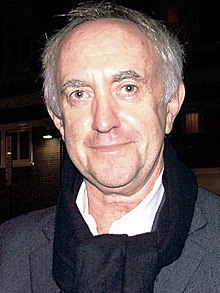 Jonathan Pryce was a member of the Royal Shakespeare Company in the 1970s . He also gave a concert in Welsh for the members of the National Assembly for Wales .

Pryce starred in numerous films such as Brazil in 1985 (along with Robert De Niro and Bob Hoskins ), Glengarry Glen Ross in 1992 (along with Jack Lemmon , Al Pacino , Ed Harris , Kevin Spacey and Alec Baldwin ), Evita from from 1996 (with Madonna and Antonio Banderas ) and James Bond 007 - Tomorrow Never Dies from 1997 (with Pierce Brosnan and Judi Dench ). For his performance in Carrington he received the Actor Award of the Cannes International Film Festival in 1995 . From 2003 he played the father of Elizabeth Swann ( Keira Knightley ) in Pirates of the Caribbean . A role that he embodied in the two subsequent films. Pryce can be seen particularly frequently in films by director Terry Gilliam : He has appeared in four of Gilliam's films ( Brazil , Die Abenteuer des Baron Münchhausen , Brothers Grimm , The Man Who Killed Don Quixote ). He can also be seen in various theater roles, such as in the musical Miss Saigon , for which he was awarded the Laurence Olivier Theater Award in 1990. In 2002 he was nominated for this award for his role in My Fair Lady .

Between 2015 and 2016, Pryce was part of the cast on the HBO series Game of Thrones . In 2019 he starred in the film drama The Two Popes in the leading role of Pope Francis . His performance earned him Oscar and Golden Globe nominations .

In contrast to many other actors, Pryce has no permanent German voice actor, most often he was dubbed by Lutz Mackensy and Lutz Riedel . Pryce is married and has three children.

In August 2020 it was announced that Pryce would take on the role of Prince Philip in the Netflix series The Crown for seasons 5 and 6 .