This article is about the crusader Hugo of Vermandois. On the Bishop of Reims, see Hugo von Vermandois (Reims) . 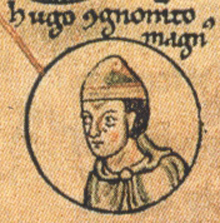 Hugo was the third son of King Henry I of France and his third wife Anna of Kiev . His eldest brother Philip I inherited the paternal throne in 1060.

Like all Capetians with the name Hugo, the Count of Vermandois was also known by the surname Magnus (German: the great) . This is how he was called by contemporary chroniclers and participants in the crusade such as Guibert von Nogent , Albert von Aachen and Fulcher von Chartres as well as by later authors such as Robert von Torigni and Wilhelm von Tire . The occasional claim that this epithet originated from a translation error by William of Tire is contradicted by the report by Guibert von Nogent, who had something to say about Hugo:

"The first line of battle, which had to bear the first thrust of the Turks, was led by Hugo, who was as his name shows, Great, ..."

He had eight children with Adelheid:

After his death, his widow married Rainald II , Count of Clermont, in 1103 .

At the beginning of 1096, news of the Synod of Clermont and the First Crusade reached the French court in Paris . King Philip was unable to attend because he was excommunicated , Hugo is said to have been told that the lunar eclipse on February 11, 1096 caused him to take the cross.

In the summer, Hugo set out with his army in Paris and traveled through Italy to Bari , from where he wanted to cross the Adriatic and reach the Byzantine Empire , unlike many other crusaders who traveled by land across the Balkans . On the way he was joined by many crusaders who belonged to the group of Count Emicho (see: German Crusade of 1096 ), but who had been defeated in Hungary after they had sacked the country. Hugo crossed the Adriatic from Bari, but lost many ships in a storm off the port of Dyrrhachion . Hugo and most of his troops were rescued by the Byzantine governor Johannes Komnenos and then escorted along the Via Egnatia to Constantinople , where they arrived in November 1096. He announced his arrival with an arrogant and insulting letter to the Emperor Alexios I , in which he asked him to meet with him:

Know, O king, that I am King of kings and that I am above all who are under heaven. You are now permitted to greet me on my arrival and to receive me with splendor, as befits my nobility.

Due to the People's Crusade under Peter the Hermit , which had passed earlier in the year, Alexios was already cautious about the armies that were announced and kept Hugo in a monastery until he had sworn him the vassal oath . After the last part of the Crusader armies had arrived in Constantinople in April 1097 and had united to form a total army, the journey through Asia Minor was continued.

After the crusaders had successfully crossed the Rum Seljuks in Asia Minor and had victoriously brought the siege of Antioch behind them, Hugo and Baldwin II of Hainaut were sent back to Constantinople at the beginning of July 1098 to solicit reinforcements from Alexios. However, the emperor was not interested. Hugo then returned to France instead of joining the plans for the conquest of Jerusalem .

In France he was despised for not fulfilling his vow to go on a pilgrimage to Jerusalem, and Pope Paschal II threatened him with excommunication. He then joined the smaller crusade of 1101 , on which he was wounded in the knee by an arrow hit in the knee in a battle against the Rum Seljuks near Herakleia in June. He escaped to Tarsus , where he died of his injuries on October 18, 1101. He was buried in St. Paul's Church in Tarsus.