The Soviet heavy tank IS-2 (JS-2) (from I ossif S talin; German Josef Stalin ) was the successor to the IS-1 and the most important representative of the IS series . It is one of the most powerful tanks that were built during World War II.

The IS-2 developed under the name IS-122 was based on the IS-85 (IS-1). It initially consisted of the hull of the IS-85 with a new turret and a main weapon of larger caliber.

While the IS-85 was still being developed, the performance and armor were found to be good, but the 85 mm D-5T cannon appeared to be too weak for a heavy tank. The newly developed D-10T with a caliber of 100 mm and the tried-and-tested A-19 with a 122 mm caliber were available as alternatives . The D-10T showed better penetration performance against armor plates, but would not have gone into mass production until the spring of 1944. Since the A-19 was not much worse, but had a much better explosive effect, it was decided to use a modified A-19, now called the D-25T.

Since the D-25T was larger and heavier compared to the D-5T, the turret had to be enlarged a little. In order not to increase the weight unnecessarily, the armor on the rear and side of the turret was reduced by around 10 mm. The disadvantage of the new cannon was the use of two-part ammunition with a correspondingly low rate of fire and the now only 28 rounds of ammunition. This tank went into series production in December 1943 as the IS-122 , at the beginning of 1944 it was renamed the IS-2 , more precisely IS-2 model 1943 .

The first missions in early 1944 showed an unexpectedly high loss rate, especially against the smaller German 7.5 cm cannons of the StuG III and Panzerkampfwagen IV as well as the similar 7.5 cm PaK 40 . In many tests and attempts at fire by the design offices, the cause was found in the unfavorable stepped frontal hull armor. With a wall thickness of 60 mm and an inclination of 18 degrees, this was even more flat, only to then rise steeply around the driver's retractable viewing hatch with 120 mm at 60 degrees. As a result, a new, evenly extending armor plate was developed, which had a continuous thickness of 120 mm at a 30 degree incline, a viewing slot for the driver was now permanently installed. This version was then called the IS-2 Model 1944 and was in production from June 1944. The IS-2 model 1944 is often incorrectly referred to as the IS-2m or IS-2M ; An IS-2M was only available in the 1950s, as a modified version of the IS-2 that was adapted to the current state of the art. This received, among other things, a better fire control system and reinforced armor.

The general of the tank troop Hasso von Manteuffel reports in his memoirs that during the fighting for Târgu Frumos in May 1944, the Greater Germany division commanded by him encountered seven IS-2s, which for him broke “the dominance of the tiger”. He had pictures taken of the captured tanks and brought them to Hitler at the Berghof together with a bullet to illustrate "the size of the colossi" .

Even if the Panzerkampfwagen IV could not keep up with the IS-2 in armor or armament, the main weapon of the Panzer IV had a good chance of defeating the IS-2's armor at short distances (around 500 m), such as in an ambush to penetrate back or side. If a Panzer IV was attacked by an IS-2, however, it had little chance of survival. There are reports that non-penetrating hits near the turret of a Panzer IV blasted it off.

Compared to the Panzerkampfwagen VI Tiger , the IS-2 had more effective armor despite its 10 t lighter weight, as it had a better shape. Big disadvantages of the tiger were its little or no beveled armor and its comparatively slow rotating turret. The IS-2's 122mm cannon was more or less the same performance as the Tiger's 8.8cm KwK.

Compared to the Panzerkampfwagen V Panther , the IS-2 was better armored and only about 2000 kg heavier. However, the Panther had better mobility on the battlefield due to its higher engine power. The Panther's cannon was slightly superior to the IS-2's 122mm cannon, allowing the two tanks to take out each other at around 1000 meters. The IS-2 also had a significantly longer reload time for its cannon than the Panther, which gave the Panther a clear advantage in combat. The Panther's weaknesses were the underpowered turret slewing system, it could only slew the turret almost straight, too little side armor and a vulnerable drive.

Compared to the Panzerkampfwagen VI Tiger II , the IS-2 had the poorer main weapon and less armor. The Tiger II was already able to fight the IS-2 at great distances, which compensated for the significantly better mobility of the IS-2. In contrast, the IS-2 was much easier to manufacture than the Tiger II. In addition, the Tiger II's turret rotation only worked when the tank was standing straight. Due to its mass, the Tiger II could not pass many bridges that were not a problem for the IS-2.

In general, the 122 mm cannon of the IS-2 was not suitable for fighting tanks at long range, as the trajectory of the comparatively slow projectiles was very curved and the weapon was only poorly precise. However, at short and medium distances, it could penetrate all armor of enemy tanks. 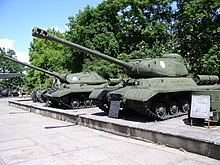 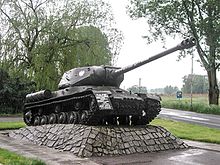 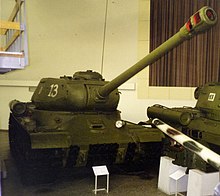 IS-2 model 1944 ( Military History Museum of the Bundeswehr , Dresden)

IS-2 of the Chinese People's Liberation Army

Commons : IS-2  - Collection of Images

Heavy battle tanks of the IS series