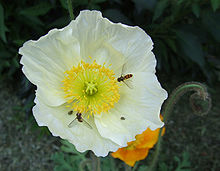 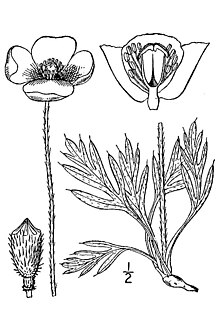 Illustration of the Icelandic poppy

The Icelandic poppy ( Papaver nudicaule ), also known as bare-stemmed poppy , is a species of the poppy family (Papaveraceae). This poppy species, which is native to the subarctic regions, blooms, depending on the subspecies, in the colors light yellow, white and orange-yellow to red. As a garden plant, there are varieties not only in natural colors and shapes, but also as cultivars in various variations.

The annual to perennial herbaceous plant reaches heights of growth of 10 to 50 centimeters, depending on the climate. The basal pinnate leaves are up to 20 centimeters long, are bluish green and grayish hairy and have several three-lobed segments.

Leafless (therefore “bare-stemmed”) flower stalks sprout from the rosette, on which, as with all poppy species, the downward-sloping flower buds form. The buds are hairy gray or brown and have a diameter of 1 to 2 centimeters. The upright, radially symmetrical , hermaphrodite flower with a diameter of 1.5 to 6 cm develops from the bud . The two sepals fall off as the flower opens. The many stamens with the yellow anthers sit tightly around the ovary . The upper ovary is usually provided with eight rays above. The flowering time is May to August in the temperate latitudes April to September. The hermaphrodite flowers are pollinated by insects or they pollinate themselves .

The very small seeds escape from the openings under the lid of the elongated, club-shaped pore capsule when the plant sways in the wind. The seeds spread via anemochory (wind spread).

The Icelandic poppy is native to the Altai Mountains, Eastern Siberia , Kazakhstan , Mongolia , Northwest Canada and Alaska . It grows on scree, mountain meadows and moraines of glaciers at altitudes between 300 and 2500 meters. This species grows in acidic or neutral to alkaline soils. At moderate temperatures, it can withstand sunny, otherwise semi-shady, dry to damp places, which, however, must not be constantly wet.

Since the cultivated forms of the Icelandic poppy bloom in different colors, it is often used as an ornamental garden . He likes the sun, but as a northern plant he doesn't like the heat. It can be cultivated in sunny to partially shaded places with well-drained sandy or clay soils that are not too moist.

The milky juice of the capsule contains poisonous isoquinoline alkaloids , including amuronin and chelidonin . The Icelandic poppy is hardly used medically. In earlier times the tasty leaves were boiled and used as a source of vitamin C to prevent scurvy . It is of no importance for the production of narcotics and especially for the production of opium .

Genetics of the Icelandic poppy

The cultivated forms of Papaver nudicaule were genetically examined, including with regard to the flower color. It was found that the white flower color is dominant in relation to the yellow flower color. Other colors, such as sand and orange, are recessive.