An Itinerar (n., From Latin itinerarium , pl. Itineraria or, more recently , itinerary , derived from Latin iter “way”) is generally the comprehensive representation of traffic routes and roads . But also street and station directories, hotel information, means of transport, tickets - actually all information belonging to a trip - for travelers, hikers, merchants or pilgrims are meant. Travel descriptions and protocol compilations of trips by well-known and important people are also designated in this way. Occasionally, a small altar that was taken when traveling is also referred to as an Itinerar .

Mesopotamian texts with travelogues are considered to be the earliest itineraries .

The following are preserved from the Roman Empire and Late Antiquity : 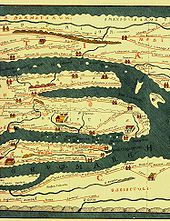 The often so-called Itinerarium Egeriae , also known as Peregrinatio Aetheriae , a report written by the pilgrim Egeria about her trip to the Holy Land in the late 4th century, is not an itinerary, but a letter report.

From the time of the Reformation there is an extensive itinerary penned by the Augsburg preacher Wolfgang Musculus (1497–1563), which documents the route from Augsburg to Wittenberg . The Raißbüchlin Jörg Gails was of importance beyond the Reformation . It appeared in Augsburg in 1563 and covered routes across Europe.

In the technical jargon of historical studies , an itinerary is understood to be the "travel route" of rulers or their scientific documentation on the basis of the dates and locations of issue of documents as well as information in the historiography . The reconstruction of stays and journeys made by early and high medieval rulers is particularly useful , as these rulers did not, as a rule, exercise a residential rule , but were traveling from one Palatinate to the next as traveling kings ( Königsitinerar ). The result, which can also be displayed as a map, is helpful for historical work; Fake documents can now also be recognized by the fact that the place of issue falls completely outside of the recreation area to be reconstructed from the itinerary. It also shows which places and regions were important for the ruler and his ruling practice.

A more recent, more prominent example of modern history is the Hitler Itinerary by Harald Sandner , which took decades of work .

In spiritual literature, itinerary can also mean a guide that should lead to a right conduct of life, up to perfection. The best-known example is Bonaventura's Itinerarium mentis in Deum (1259).