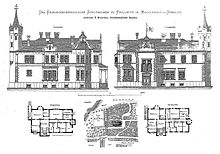 The Prillwitz Hunting Lodge is a former hunting lodge of the Grand Dukes of Mecklenburg-Strelitz in Prillwitz in the municipality of Hohenzieritz in the Mecklenburg Lake District in Mecklenburg-Western Pomerania . The castle from the historicist era stands on the banks of the Lieps and is therefore also called the Lieps Castle .

After extensive reconstruction, it has been rented out for events, overnight stays and filming since 2014.

In 1795, Duke Carl von Mecklenburg-Strelitz bought the Prillwitz estate from the von Bredow family . The mansion from 1706, which was already in existence at the time, still exists today. In 1882 the Hereditary Grand Duke and later Grand Duke Adolf Friedrich V took over the management of the estate. His father, Grand Duke Friedrich Wilhelm (II.) , Built the hunting lodge next to the old mansion for him from 1887–1889. The plans for this neo-renaissance building in the style of a country house come from the architect Eugen Müschen, who worked as a grand ducal master builder in Neustrelitz. In a single-storey annex that no longer existed, part of the inner walls was decorated with walled-in oyster shells and snail shells and was called a "grotto".

After the suicide of the last and unmarried Grand Duke of Mecklenburg-Strelitz , Adolf Friedrich VI. , on February 23, 1918, the castle came into the possession of his mother, Grand Duchess Elisabeth .

In 1945 the castle was looted and later inhabited by refugees and new settlers. Despite the turmoil after the war, most of the wood paneling in the entrance hall, the stairwell and the hall (the later restaurant) was preserved.

In 1955 the Neubrandenburg Energy Combine took over the castle and built a holiday property in it. During this time, the appearance of the building was adapted to the zeitgeist of the time. This also included three flagpoles for the flags of the Soviet Union , the GDR and the energy combine. By using the building as a consumer restaurant and rest home, however, vacancy and decay was prevented.

Since 1995 the house has presented itself as a hotel with an attached restaurant. At the end of 2006 the owner changed and in the winter of 2007 / spring 2008 the building was renovated in accordance with the requirements of the monument and the park was restored. The reopening took place on April 4, 2009 after further renovation measures. In the years from 2012 to 2014, further measures were carried out and the former appearance was largely reconstructed , the tower, which was demolished in GDR times, was rebuilt, the park was redesigned according to the historical model. Since then, the castle can be rented in full for events, filming and overnight stays, for which three suites with two bedrooms each and a further three double rooms are available.

The author Frank Pergande made the hotel in the Prillwitz hunting lodge the main location of his regional thriller The Curse of the Duck .