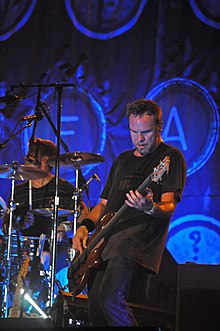 Ament began his musical career in a band called Deranged Diction, before joining the band Green River with Stone Gossard , Steve Turner and Mark Arm . After Green River broke up, Jeff and Stone founded Mother Love Bone , which was soon on the verge of a breakthrough. Due to the drug death of singer Andrew Wood , the band was disbanded in the late 1980s and Pearl Jam was founded. Jeff Ament still plucks the bass here today.

In addition to Pearl Jam , Ament is working with Robbi Robb from Tribe After Tribe on the Three Fish project . He also released his first solo album entitled "Tone" on September 16, 2008 under the Monkey Wrench label. The album was only released and distributed in the USA with a limited number of 3000 CDs. It is also available as a download. The album comprises 10 songs and has a playing time of almost 33 minutes.

Ament is a big sports fan and is interested in basketball and skateboarding , among other things . He is also very active in the hardcore scene. He himself has been straight edge since 1989 .

Together with his brother Barry Ament, Jeff runs the design company "Ames Bros.", which is responsible for many Pearl Jam posters, CD artwork and newsletters.

For his cover design of the albums " Lightning Bolt " by Pearl Jam and Chris Cornell 's box set "Chris Cornell", he and his brother Barry received the Grammy in 2015 and 2020 for "Best Recording Package".