This article is about the politician. For the rower see Jens Köppen . 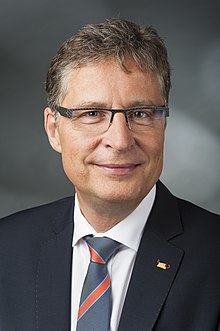 Jens Koeppen (born September 27, 1962 in Zeitz ) is a German politician ( CDU ) and entrepreneur . He has been a member of the German Bundestag since 2005 and was chairman of the Digital Agenda Committee, which was newly constituted in the 18th electoral term of the German Bundestag from 2014 to 2017 . As the successor to Michael Stübgen, he has been chairman of the Brandenburg state group within the CDU / CSU parliamentary group since 2019 .

After attending the Polytechnic High School (POS) in Schwedt / Oder , Koeppen completed an apprenticeship as an electrical engineer in the Schwedt petrolchemical combine from 1979 to 1981 and passed the master's examination in the industrial electrical engineering department in 1986 and in the electrical installation trade in 1991. In 1987 Koeppen trained as an antenna technician specializing in large community antenna systems . After the reunification , Koeppen founded his own company for antenna and electrical engineering in Schwedt.

Jens Koeppen is Protestant , married in his second marriage and has a daughter.

Koeppen joined the New Forum in 1989 and was a member of the speakers' council there.

In 1989 Koeppen joined the city council of Schwedt as a co-opted member and chaired the committee to investigate abuse of office and corruption.

In the state election in Brandenburg in 2004 , Koeppen ran as a direct candidate in the Uckermark II constituency , but failed to make it into the state parliament.

Jens Koeppen entered the Bundestag in 2005 and 2009 via the Brandenburg State List . In the federal elections in 2013 and 2017, he won the direct mandate in constituency 57 .

In 2019 he was elected chairman of the Brandenburg regional group of the CDU / CSU parliamentary group in the German Bundestag.