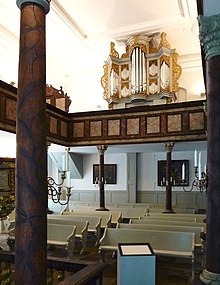 Organ in the Eutin Castle

Few details are known about Hanff's life. He grew up in Wechmar, Thuringia . It is known that he was a music teacher in Hamburg and held several positions as a church musician. One of his pupils was the then seven-year-old Johann Mattheson , who then learned composition and piano with him for four years. Until 1696 Hanff was organist at the Eutin court of the Prince-Bishop of Lübeck .

After the death of Prince-Bishop August Friedrich and the dissolution of his court in 1705, Hanff probably returned to Hamburg, where two children were born to him in 1706 and 1711. On August 26, 1711 he took over the position of organist at Schleswig Cathedral , but died a few months later.