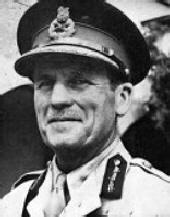 John Harding first attended school in Ilminster , Somerset , and then studied at King's College London . He served as a lieutenant in the Middle East during World War I. At the beginning of the Second World War he served in Wasiristan and was Mentioned in dispatches . Then he went to the Middle East. In 1942 he commanded the 7th Panzer Division , the famous "desert rats" against the German-Italian units. At the end of the war he commanded the XIII. Army Corps.

On October 3, 1955, John Harding became governor of Cyprus and at the same time commander in chief of the British troops in Cyprus. He held this office until October 22, 1957. During this time, the resistance against the colonial power erupted violently in a terrorist uprising organized by the EOKA (Ethniki Organosis Kyprion Agoniston). His attempts to negotiate with Greeks and Turks on the island failed. Harding had to put in considerable effort to contain terrorism. So he arranged that the head of the Greeks on the island, Archbishop Makarios III. , had to go into exile in the Seychelles for a year . Although some of his troops were extremely brutal, they were not able to completely defeat terrorism.

On his return to England he was raised to Baron Harding of Petherton in 1958 . His son John Charles Harding inherited this title after his death .