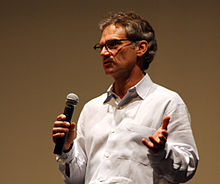 Jon Krakauer (born April 12, 1954 in Brookline , Massachusetts ) is an American mountaineer and author.

Jon Krakauer grew up in the US state of Oregon and came to mountaineering very early through his father. He was strongly influenced by his personal acquaintance with Willi Unsoeld , who was a friend of his father's.

“A few months before Unsoeld left for Nepal, I climbed the summit of my first mountain together with my father, Willi and Regon [Unsoeld] - a somewhat sensational 2750 meter high volcano in the Cascade Range [...]. So it is hardly surprising that the stories of the hero saga of 1963 on Everest keep my prepubescent imagination busy for a long time. While my friends made John Glenn , Sandy Koufax and Johnny Unitas their idols, my role models were Hornbein and Unsoeld. "

He works as an author in the field of mountaineering and outdoor and among other things works for the magazine " Outside ". He became internationally known through his factual report " Into Thin Air " ( Into Thin Air ) supported by the disaster on Mount Everest is in May 1996, in which he as a journalist for "Outside" in Rob Hall's Team Adventure Consultants participated. Two commercially run expeditions got into one of the frequent thunderstorms that can occur suddenly in the afternoon even on good ascent days. The storm and the lack of rescue options led to the death of several expedition members as a result of lack of oxygen, exhaustion, frostbite and falls.

From Krakauer's magazine reports and his book In icy heights , a fierce controversy developed with the mountain guide Anatoli Bukrejew , who was professionally involved in the same event and who presented the event differently in many points in another book. Krakauer's book became a bestseller that sold millions of times. Hall's widow called him scum because he printed the last radio conversation between the dying man and her in his book.

Another bestseller was Krakauer's book Into the Wild , in which he describes the fate of the dropout Christopher McCandless . The film adaptation of the work under the title Into the Wild (2007) by Sean Penn reached an audience of millions worldwide.

In Murder on behalf of God (2003) he tells the story of the Mormons , their origins and their persecution, but also the crimes that members of this religious community have committed and how the Mormons deal with them.

Krakauer has been an active mountaineer since his youth and has completed numerous tours, some of them extreme. He lived in Seattle for a long time before moving to Boulder with his wife in 1997 .