The title of this article is ambiguous. Further meanings are listed under Zimba (disambiguation) .

The Zimba (also called Cimba or Zimbaspitze in old literature ) is 2643  m above sea level. A. high mountain of the Vandanser Steinwand in the Rätikon , a mountain group of the western Central Alps (Eastern Alps) in the Austrian state of Vorarlberg .

It has an even shape and sends out even ridges to the northeast, east and west. The mountain was climbed for the first time in 1848. Since 1902 there has been a base for alpinists with the Sarotlahütte at 1611  m on the north side of the Zimba, since 1909 with the Hueterhütte also on the south side. Thanks to its easy accessibility, it is now a popular destination for mountaineers and climbers .

Zimba viewed from the south

The Zimba is the highest elevation of the so-called Zimbagruppe , a side ridge of the Rätikons. Its summit is part of the Vandanser Steinwand and lies on the border between the communities of Vandans and Bürs . Neighboring mountains in the northeast are the Große Valkastiel with a height of 2449  m , in the east the Steintälikopf (2443 m), in the west a jagged jagged point (approx. 2450 m) known colloquially as " Kleine Zimba ", which is not listed on the official maps, another unnamed, mapped summit with a height of 2557  m and again a few hundred meters west of the same high Brandner Mittagsspitze , in the northwest the 2372 meter high Wildberg (to differentiate it from other wild mountains sometimes also called Sarotla Wildberg ) and the Sarotlahörner , the highest of which is 2192  m . To the north the area slopes down to the Montafon Valley , in the southeast the Rellstal runs , in the south lies the Kanzlatäli , a high valley, in the southwest the Lünersee (water level when the water level is full at 1970  m ), and in the west the Brandner Valley forms the end of the Zimba group. The closest place to the west is Brand im Brandner Tal, about 4 kilometers away as the crow flies . Vandans is 6 km to the east and Bludenz 9 km to the north.

History of ascent and tourist development 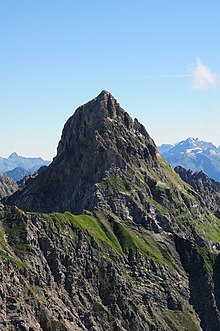 The first documented ascent of the Zimba was made by the well maker Anton Neyer from Bludenz on September 8, 1848, single-handedly. It broke up in fire, hiked up to the Sarotlaalpe , headed south-east towards the cirque area called Steintäli , crossed the east ridge at the Neyerscharte (approx. 2360 m) later named after it , reached the summit through an arduous climb through a chimney on the south side and arrived in Bludenz in the evening more than 2000 m below. He found a human skeleton near the summit. Neyer left his mountain stick and a copper box with a note on the summit. Although Neyer was known as a good climber, his ascent was not believed, as the Zimba was considered to be impassable. In August 1854 three hunters from Brand were commissioned to place a survey signal on the Zimba. They climbed a gully on the north side and found Neyer's items.

The Zimba has been climbed via the west ridge since 1900. This normal route leads from the Sarotlahütte in the north or the Heinrich-Hueter-Hütte , located in the south at 1766  m altitude, up to the Zimbajoch ( 2387  m ). From there it goes over the west ridge with the Sohmplatte to the summit cross . The Zimba, which consists of the main dolomite , has been climbed since 1875, but the old routes are no longer used because the risk of falling rocks and landslides is too great due to the mountain formation in the Rätikon, which continues to this day . Today, the east ridge beginning at the Neyerscharte is primarily of interest to climbers, along the routes in various variants up to the level of difficulty UIAA IV , as well as the north edge (UIAA III) and the north-east ridge (UIAA II) as the easiest and shortest climb to the summit .

The Zimba is known as the Montafon Matterhorn due to the similarity in terms of appearance, the moderate quality of the rock and the rush on beautiful days .