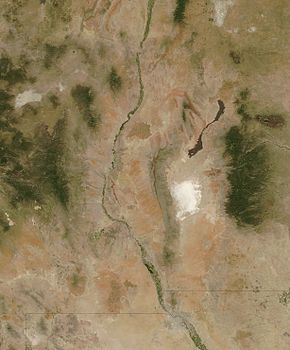 The Jornada del Muerto (Path of the Dead) is the name of the earliest Spanish conquistadors and settlers for a section of El Camino Real de Tierra Adentro , the historic royal road from Mexico City north to Santa Fe in what is now New Mexico, America . This led the settlers along the Rio Grande (formerly Rio Bravo) through the inhospitable desert and mountainous regions of the southern United States, which they called "El Fronterizo" . The Jornada del Muerto is the longest of several sections of the route on which the route deviated from the Rio Grande and was largely waterless. It is located in New Mexico and branches off a bend in the river a little north of Las Cruces , which because of the rugged cliffs and quicksand in the bank area, the covered wagons or pack animal caravans of that time would not have been able to pass or at least would have extended the journey considerably, and runs almost 150 km straight north. Between Truth or Consequences and Socorro , he meets the river again. It was driven through in several days, whereby the travelers usually stopped at several established rest areas known as parajes , and had no reliable water source.

As Jornada del Muerto even that will dischargeless valley called, where the path portion runs. It is one of the many moats in the north-south direction of the Basin and Range region. The valley lies between the ranges of hills on the Rio Grande, including the Fra Cristobal Mountains in the west and the San Andres Mountains in the east. In the north it is bounded by the Brushy Mountains and the Sierra Larga , which represent the southernmost foothills of the Manzano Mountains . In the south, the river and mountain range meet near the border between New Mexico, Texas and Mexico, which defines the actual Jornada del Muerto Valley. The drainless basin continues to Texas.

The wagon trains or pack animal caravans usually traveled north from El Paso on the west bank of the river. Shortly after what is now Las Cruces , the small Robledo Mountains rise there , here the first crossed the river to the north-eastern bank. Others moved on before they crossed the river a few miles further at what would later become Fort Selden , thus bypassing the Doña Ana Mountains on the other bank to the west. In both cases there was a paraje directly on the river , people and animals took the opportunity to relax and, for the last time, to have plenty of water available. From here the path led almost straight north, over several days through a semi-desert with no safe sources of drinking water. All route variants met again at the narrow space between the Fra Christobal Mountains in the west, which prevented direct access to the river, and a lava field known as Malpais (Spanish for bad land), which was hardly passable. At the northern end of the Fra Christobal Mountains they came back to the river where the Paraje Fra Cristobal was laid out. Today the Rio Grande is dammed here to the Elephant Butte Reservoir . Further south are Elephant Butte and Truth and Consequences. From here the path ran along the bank, on the other side of the river was Fort Craig. South of today's Socorro is the striking boulder Mesa de Contadero or Black Mesa and north of it the river widens to a flat marshland with tributaries, which is now designated as the Bosque del Apache National Wildlife Refuge as a national wildlife sanctuary, especially for water birds. Here the arid section of the journey ended and the boulder also marks the point from which a typical journey only needed three more weeks to Santa Fe.

The first white man in the area was Juan de Oñate , a conquistador who, on behalf of King Philip II of Spain, explored the Rio Grande to the north in 1598 in order to take possession of the previously unknown area for the viceroyalty of New Spain . The Spanish were drawn to the legend of the seven golden cities of Cibola . Earlier expeditions, such as Francisco Vásquez de Coronado's 1540–42, had moved further west to the north. On the upper reaches of the Rio Grande de Oñate encountered the Pueblo - Indians who lived as farmers in the desert regions, by they used a sophisticated irrigation system. De Oñate claimed ownership of Nuevo Mexico for Spain, founded Española, the first Spanish settlement in the area, and tried to subjugate the Pueblo Indians and make them taxable. Santa Fe was founded in 1610 and immediately became the new capital of Nuevo Mexico . The colonialists built farms and monasteries; Franciscan fathers did not always baptize the Indians by peaceful means. The Camino Real was the colony's lifeline, the Jornada del Muerto the most difficult section of the way. In 1680, the pueblo peoples rebelled against the Spanish in the pueblo uprising . The small white garrison was enclosed and besieged in Santa Fe. Around 2000 of the originally around 2800 whites were able to break through and flee over 300 km on the Camino Real and through the Jornada to the south to the area of ​​today's Mexican-American border near El Paso , Texas and Ciudad Juarez , Chihuahua , Mexico.

In 1692 the Spaniards dared to travel north again, and from 1698 they re-established the rule. However, the colony never returned to its humble proportions before the uprising. The Camino Real and the route through the Jornada were of limited importance for supplying the northernmost parts of the viceroyalty of New Spain , which, despite all the rumors of gold and silver treasures, never became economically independent.

After the Pueblo Uprising, the Apache influence in the area also increased. Her sporadic raids have since been considered a danger on the Jornada. In 1821 Mexico became independent from Spain. Not much has changed for the uninhabited region and the trade route.

In the Mexican-American War of 1846/48, the US Army under Colonel Alexander W. Doniphan advanced south along the Trail and the Jornada and fought with a small Mexican unit on the Rio Grande immediately south of the Jornada. He beat the Mexicans and advanced further, winning again at Chihuahua and reaching Parras in time for the great battle at Buena Vista, in which the Mexican army was decisively defeated by General Scott, who had advanced from the northeast.

As a result of the war, Mexico had to cede its northern provinces to the United States in the Treaty of Guadalupe Hidalgo . The US Army built Fort Craig at the north end of the Jornada in 1854 and Fort Selden at the south end in 1864 . The troops also suppressed the activities of the Apaches, largely displacing them to the area west of the river in the San Mateo Mountains .

During the Civil War , General Sibley of the Confederate States Army advanced as part of the New Mexico campaign over the Rio Grande and the Jornada from the south into New Mexico, which is part of the Union. However, he could not capture Fort Craig, which subsequently threatened his supply routes, and was stopped in the battle of Glorieta Pass in northern New Mexico. His supplies were lost and he had to withdraw with his troops to Texas.

In 1881 the Atchison, Topeka and Santa Fe Railway built a railway connection from Santa Fe to El Paso, the Camino Real and the Jornada suddenly lost their importance. As part of the railway construction, there were also attempts to colonize the Jornada. They all failed because of the harsh climate.

The remote region only regained importance in World War II , when a test site was sought for the first atomic bomb developed in Los Alamos . The uninhabited valley of the Jornada was selected and on July 16, 1945 the first atomic bomb was detonated at the Trinity Site . The White Sands Missile Range , which still exists today, emerged from the test site .

The San Andres Mountains and the east of the valley belong to the White Sands Missile Range, Trinity Site is within the military base in the northeast of the Jornada. Beyond the mountains, in the neighboring Tularosa Basin to the east, lies the White Sands National Monument , a gypsum desert, which gives the test site its name .

Today the Atchison, Topeka and Santa Fe Railway runs through the Jornada, for example on the former Camino Real, and a parallel, undeveloped road. Spaceport America was built in the ghost town of Upham from 2005 to 2011 . On October 17, 2011, it opened as the first privately financed spaceport.