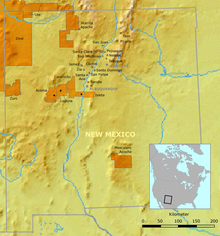 Location of the pueblos and neighboring Indian reservations in New Mexico.

The pueblo culture or pueblo indians are those of the indigenous peoples of North America who live in pueblos . The pueblo culture includes the Hopi , Keresan , Acoma , Tano , Zuñi and their predecessors, the Hohokam , Anasazi , Mogollon and Sinagua .

Language and area of ​​residence 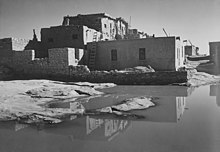 The Pueblo Indians live in northern Mexico and in the present-day states of Arizona and New Mexico , on the Colorado Plateau and on the Rio Grande and its tributaries. There were more than 40,000 people in about 90 villages. Today only 30 settlements are inhabited.

The Pueblo Indians belong to several different language groups, which in turn are divided into several main languages. The largest language group here is the tano , which belongs to the Kiowa-Tano language family . The Tano consists of three main languages, namely Tiwa , Tewa and Towa . Tiwa is spoken by the residents of Taos Pueblo , Picuris , Sandia and Isleta . Tewa is the language in the pueblos Nambe , Pojoaque , San Ildefonso , San Juan , Santa Clara, and Tesuque . Jemez is the only pueblo in which toba can still be heard today. Another language group is the Keres , whose speakers can be found scattered among the Tano speakers on the Rio Grande and its tributaries in the pueblos of Cochiti , Santo Domingo , San Felipe , Santa Ana and Zia and further west in Laguna and Acoma . Even further to the west is the Zuñi-Pueblo , where Zuñi is spoken. In northern Arizona, on three mesas of the Colorado plateau , live the Hopi , who linguistically belong to the Shoshone branch of the Uto-Aztec language family . The Keres language group and the Zuñi language are now considered isolated languages .

Despite the different languages, cultures are largely similar. The explanation is a breakdown according to Lineagen in the context of the introduction of arable farming , the previous Archaic Period can still be assumed to be largely compliant according to archaeological studies. The cultural correspondences arose on the one hand through direct exchange, on the other hand they are explained by concurrent evolutionary developments under the same or similar environmental conditions.

The Pueblo Indians can be divided into two groups according to the location of their villages. The Eastern Pueblo (Tano and Keres speakers) live on the Rio Grande and its tributaries and thus have a permanent water source that allows them to cultivate irrigation . The western pueblo (Hopi, Zuñi, Acoma and Laguna) are dependent on dry fields due to a lack of constant water supply.

The basketmakers are considered the forerunners of the Pueblo culture . Originally hunter-gatherers, their way of life changed from around 750 onwards when agriculture began . A solid and safe source of food made it possible to stay in one place permanently. The first permanent houses were built, so-called pithouses . These were laid out half underground and had the shape of a truncated pyramid.

Part of a Hopi pueblo in Arizona

With the sedentary life, craft skills such as pottery , making better tools and hunting weapons, and jewelry making also developed. The construction method also changed, houses were built at ground level with vertical walls. Initially with tree trunks plastered with clay, later made of stone. As the population grew, more rooms were added to the existing ones, and larger settlements gradually emerged. It is unclear how the change in architectural style came about. One possibility, however, could have been the aforementioned growth in the number of residents. In contrast to the construction of individual houses, building in this form allowed for easier expansion.

As the first European, Álvar Núñez Cabeza de Vaca and his companions crossed the area in 1535. His reports later triggered the Coronado campaign .

Way of life, culture and religion

Even in the times of the Anasazi, the pueblo culture was a very complex structured theocratic society. There were probably certain assignments of tasks and specializations. However, this cannot be said with certainty, as there are no written records. The only indications of life at that time are archaeological finds such as tools and utensils, paintings and carved drawings on rocks, but also legends of the descendants of the Anasazi.

The livelihood during this time was mainly the cultivation of maize and beans and the gathering of wild plants and fruits as well as the hunting of bighorn sheep , elk , mule deer , pronghorn , donkey rabbit and other small game. At that time, animal husbandry was limited to turkeys and dogs , the breeding of sheep and goats was only taken over by the Spaniards around the 16th to 17th centuries .

The creation myths - which are very similar everywhere - have an important meaning for all Pueblo peoples : From an earlier, holy and non-human existence without illness, evil and death, the Tewa , for example, rose from the underworld and matured on earth to people. Six mythical twin pairs served as guides (see also: Kulturheros ) . Living people are considered "ignorant" and after death become ancestors in the sacred underworld. The political leaders of the Tewa - the Towa é - are equated with the mythical twins. Above them are the Patowa , the members of the eight religious secret societies who are the actual rulers of the traditional pueblo societies and are often referred to as priests . They can partially embody the remaining beings from the underworld (see also: Kachina ) . They “monitor” the mandatory ritual calendar, which consisted of eight tasks on the most important changes in nature during the year. The implementation took four days each, so a total of 32 days a year. The rituals are the responsibility of the secret societies, which consist of a secret and a public part; the whole village is only involved in the ritual of the winter solstice.

1692 the Pueblos were forcedly by the Spanish missionary . However, the secret societies and their ancient ceremonies continued to exist in secret. Today one can speak of a syncretistically mixed "Pueblo Christianity" in some villages , in others of two more compartmentalized , co-existing religions that hardly influence each other.

The craft experienced a special phase of further development under the Pueblo culture. Overall, people used all natural materials such as stone, wood and bones to produce a wide variety of tools and utensils: bone awls, stone axes and knives, fire drills, digging sticks, etc.

Basket weaving was already known from earlier culture. Over time, however, people also acquired an increasing skill in pottery. The basis for this craft was possibly the knowledge of the use of loam , earth or clay as a solidifying binder in house construction. From there it was surely only a small step to use the same material to form bowls and other vessels. Simple utensils such as water jugs as well as bowls for ceremonial acts were artfully decorated. Incised patterns, but mostly painted with natural colors with a wide variety of motifs were found: depictions of animals, straight lines and zigzag lines, spiral ornaments.

Another part was jewelry making. For example, mussels and turquoise were bartered far inland. From this jewelry such as pendants or amulets were made. These were used within the community simply as jewelry, perhaps also as a status symbol, or they were again used as objects of exchange.

Even today, the manufacture of jewelry with turquoise stones and pottery are part of the Diné and Zuni tradition . In some cases there are factory-made ceramics that are very similar in shape and painting to those made by hand. Handmade pottery, however, can always be recognized by the artisan's signature incised on the underside of the floor.

An extensive network of trade routes connected the individual settlements. Proof of this are, for example, mussels from the Pacific coast , which were found in Mesa Verde National Park . Conversely, pottery with the typical pattern of the residents of Mesa Verde was also found further south, for example in the Chaco Canyon . Either this happened simply by passing on from one settlement to the next, but it is also possible that there were traders who moved from village to village and used them to establish contact with other cultures.

Today some tribes have established extensive tourism businesses. For example the Zuni (Ashawi) who run hotels on their reservation . The area of ​​information technology is also a growth branch for the Zuni (geared for services within their own tribal organization).