The Zuñi belong to the North American Pueblo peoples . They live in the Zuñi Pueblo along the northern bank of the Upper Zuñi River , a tributary of the Little Colorado River in the west-central US state of New Mexico on the border with Arizona . They also live in three smaller neighboring settlements in summer - Pescado (also 'Heshotatsina'), Nutria (also 'Tawyakwin') and Ojo Caliente (also 'Kyapkwainakwin').

The name Zuñi was given to them by the Spanish conquerors and is the Spanish version of Siinyyitsi (also Su'nyitsa or Sunyi ), as they were called by their Keres neighbors. They call themselves A'shivi (from Shivi - 'the meat'). Their traditional tribal area, which lay along the Zuñi River and its tributaries, as well as the neighboring mesas , was called the Zuñi Shi'wona or Shi'winakwin ('the land that produces meat, i.e. the Zuñi'). The Zuñi speak the language of the same name , which is not related to any of the other tribes in the southwest.

Their origins and early history are unknown; their mythology describes that their ancestors emerged from the underworld and moved to their present place of residence. When they first met the Spaniards in the 16th century (1582/1583), they lived in Hawikuh and six other cities. These were collectively named The Seven Cities of Cibola . Today's pueblo was built on the site of old Halona , one of the Zuñi towns of that time. At that time the Zuñi numbered over 3,000 members.

In 1539 the Viceroy of Mexico , Antonio de Mendoza , sent the Franciscan Marcos de Niza north to find out whether the Zuñi settlements were the legendary seven cities of Cibola. Rumors circulated among the Spaniards about turquoise gates , streets paved with silver and a fabulous gold treasure like the Moctezuma II. For months Marcos wandered through the desert with the Moorish Esteban and his men without finding the longed-for gold city. Esteban fared worst. The Zuñi killed him for allegedly molesting their wives. Nevertheless, a statue was erected for Esteban in neighboring Acoma , which can still be viewed there today.

The Spaniards were not discouraged by the failure of the Marcos expedition. The following year, Francisco Vásquez de Coronado equipped a new expedition that attracted about 400 people, including many notorious villains and adventurers from Mexico City . It is not known how many Indians took part in the expedition. Coronado's army marched over 2,000 km north and came through the land of the Apaches to the pueblos of the Zuñi. He captured Hawikuh and had to realize that it was by no means the gold city he was looking for. On the Río Grande , Coronado met a dark-skinned man (he called him the Turk ) who told him about people in the east, in Kansas , who were so rich that they themselves made their canoes out of gold. So Coronado moved to Kansas. At today's Abilene he finally reached Kansas, but found no gold. He had the Turk killed without further ado and made his way back to Mexico disappointed. He went down in history as the Don Quixote of the New World.

The Franciscans built a mission in Hawikuh in 1629. The presence of the monks led to disputes with the Zuñi and the death of two missionaries in 1632. Fearing revenge from the Spaniards, the Zuñi fled to the fortified town of Towayalane on a steep mesa in what is now the Corn Mountains southeast of Hawikuh. Outwardly, the Zuñi appeared to accept Spanish laws, but in reality they followed a course of passive resistance. At the end of the 17th century, the Apache raids increased and finally led to the abandonment of Hawikuh in 1672. The Zuñi supported the pueblo uprising of 1680, but they were only marginally involved due to the distance to the hot spots on the Río Grande. In 1692 they fled from Antonio de Vargas ' army again to Towayalane on the mesa, but de Vargas was able to persuade them to resettle in Halona. A new church was built there in 1699.

Despite the increasing number of attacks by the Apaches (they called the Zuñi Nashtizhé or Nashtizhé'nde - 'blackened eyebrows') throughout the southwest and deep into Mexico, from which the Zuñi were not spared, there were often peaceful contacts with some groups of the Apaches . Since the land of the Zuñi was on the way to Dinetah , the land of the Diné (Navajo) - these were a popular destination for raids by the Chiricahua and other Apaches - the Zuñi were often casually victims of attacks by the passing Apaches. For the western Apaches , the Zuñi and the Diné were the most important partners (alongside the Hopi and the eastern Pueblo ) in order to be able to trade their goods and their looted property. The Apaches offered stolen horses, mules, donkeys, goats, cattle, collected acorns, mescal, wild plants as well as furs, turkey breast feathers, water bottles and baskets. In return, the Zuñi gave the coveted white and blue Zuñi blankets, calico (simple cotton fabrics, often printed with all-over floral patterns), old muskets and powder, iron farm implements and other useful goods. The Zuñi maintained a tense relationship with the neighboring Hopi, which sometimes turned into open hostility, but mostly the two isolated peoples allied themselves in the fight against their common enemies, Apaches and Diné.

The social psychologist Erich Fromm analyzed the willingness of 30 pre-state peoples, including the Zuñi, to use ethnographic records to analyze the anatomy of human destructiveness . In conclusion, he assigned them to the “life-affirming societies”, whose cultures are characterized by a pronounced sense of community with great social equality, friendly child rearing, tolerant sexual morality and a low tendency to be aggressive. (see also: "War and Peace" in pre-state societies )

On October 30, 1846, the Zuñi came into contact with the first representatives of the United States when army troops under Captain Monroe M. Parson returned from an expedition to Dinetah against the Diné and sought out the nearby Zuñi pueblo because they were in dire need of food and supplies needed. Two years later, on February 2, 1848, the Treaty of Guadalupe Hidalgo between the United States and Mexico was signed, in which Mexico had to cede more than half of its national territory and New Mexico and thus the tribal area of ​​the Zuñi became part of the United States.

On August 8, 1850, the Zuñi in Santa Fe signed the so-called Pueblo Treaty with the Indian Commissioner for the Territory of New Mexico James S. Calhoun (and between 1850 and 1852 first governor ), in which they were contractually guaranteed the protection of their tribal territory and their sovereignty . On October 26, 1851, Major Electus Backus brokered a peace treaty between the Diné (Navajo), Hopi and Zuñi, in which it was stipulated that the Diné were forbidden to attack and rob the two Pueblo peoples.

Despite the peace treaty between the three peoples, the United States tried unsuccessfully in the years that followed to stop the raids by the Diné and Apaches in order to allow American and Mexican farmers to settle. During the American Civil War (1861-1865), the Washington government wanted to keep traffic routes and communications links to and from California through Arizona and New Mexico open. Therefore the constant raids and raids by the Mescalero-Apaches and Diné had to be stopped. This led to the so-called. Navajo War (1859-1864), and as early as 1860 US troops along with scouts the enemy Ute , Zuni, Hopi, other Pueblo peoples and civil militias of the Spanish Americans undertook regular combat patrols and raids by Dinetah . In 1862 Kit Carson finally subjugated the starved Mescalero in a nine-month long punitive expedition and had about 500 tribesmen brought to the Bosque Redondo reservation near Fort Sumner .

In the summer of 1863, Colonel Kit Carson was commissioned by the Commander-in-Chief, General James Carleton, to relocate the Diné to the Mescalero Reservation on the Pecos River by destroying the economic foundations of the Diné. Carson moved with 300 soldiers, reinforced in turn by Ute, Hopi, Zuñi and Pueblo Indians to Dinetah and destroyed orchards, stocks of corn, Hogans, water holes and herds of cattle. On January 14, 1864, the actual campaign began. Kit Carson allowed the Diné to take refuge with their main force in the Canyon de Chelly, which they considered impregnable . But on the edges of the gorge the Americans had positioned cannons and the Diné surrendered after a short battle and had to take the infamous Long March .

During the fighting, the Zuñi not only served as scouts for the US Army, but also, taking advantage of the distress of their old enemies, sent their own war troops against the Diné. When the Diné raids against the Zuñi came to an end in 1864 (Apache raids lasted until the 1870s), they even offered some Diné groups, with whom they were friendly, protection from the US Army and provided them with Food. On June 1, 1868 Diné chiefs signed the so-called Treaty of Bosque Redondo in Fort Summer , which allowed them to live in what is now the Navajo Nation Reservation ( Diné Bikéyah / Naabeehó Bikéyah ) within Dinetah. Some Diné families settled in the tribal area of ​​the Zuñi and now live as the so-called Ramah Navajo in the Ramah Navajo Indian Reservation ( Tlohchini - 'Place of the Wild Onions'), east and south-east of the Zuni Indian Reservation . 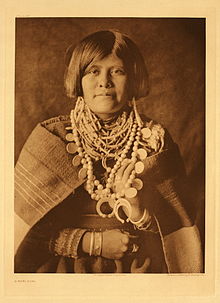 Zuni girl with a clay jug around 1903

Way of life and culture

The Zuñi Society is made up of thirteen matrilineal clans , but the senior officials are male. The Zuñi sometimes work as farmers, ranchers and seasonal workers. Many men and women make excellent silversmiths and turquoise jewelry; Typical are the mosaic-like inlays and pieces in the so-called needlepoint style . Basketry and pottery are among the most important handicraft activities of women. The Zuñi, like the other Pueblo Indians, are generally peace-loving and deeply religious, with a complex ceremonial structure. The men often wear masks and costumes for Kachina mentioned representation of gods and spirits.

The Zuñi's greatest attractions for visitors are their dances and jewelry. The best chance to see a dance is in late winter and early spring. The most famous in the southwest is the Shalako, a year-round ritual that culminates in December. Then the four-meter-high, bird-like shalakos come into the village and dance all night to bless new and renovated houses. Although the Zuñi have seen considerable adaptation to the modern American lifestyle, some of their traditional customs have survived. At the end of the 20th century there were around 8,135, of which 4,650 were permanent residents in the approximately 1,646 km² reserve .

The Zuñi religious belief system has five central deities. The sun father , the rainmakers Uwanami , who live on the edge of the world, the animal gods as patrons of medicine men, the coco masks , which are ascribed to the village of Kotluwalaw and the twins and gods of war Ahayuta .