Jucifer is a sludge duo from Georgia , founded in 1993 , known for the loud volume of their concerts and years of touring.

Edgar Livengood and Amber Valentine founded a joint sludge duo in Athens in 1993 . The band appeared under different names and in 1994 decided on the final band name Jucifer. Livengood and Valentine got to know each other during a concert and agreed to rehearse together based on a mutual agreement of creative ideas. After a short time making music together, the musical connection developed into a lasting couple relationship. Later in the band's career, the duo married.

In 1994, Jucifer published Nadir, the first demo tape that was sent to potential promoters in order to acquire opportunities to perform . The following year, the first single Superman / Licorice appeared as the first release on the independent label Crack Rock Records . The same label, run by a musician friend, released the debut album Calling All Cars on the Vegas Strip in 1998, which was sponsored by college radio stations. This first respectable success caused the attention of the label Capricorn Records , which mainly specializes in Southern Rock , which bought the publishing rights to the album, revised the recordings and re-released it in 2000 under the same title. With this, Jucifer were presented to a wider audience. Shortly thereafter, Capricorn stopped his activity and Jucifer switched to Velocette Records , where the duo released the EP Lambs in 2001 , the album I Name You Destroyer in 2002 and the EP War Bird in 2004.

In 2004 the first live DVD, A Partridge in a Pear Tree, was released . This was followed by a move to the popular extreme metal label Relapse Records , where the albums If Thine Enemy Hunger (2006), L'Autrichienne (2008) and Throned in Blood (2010) were released. With Throned in Blood , which was already released in cooperation with Alternative Tentacles and the band's own label Nomadic Fortress Records, Jucifer ended the cooperation with Relapse Records and from then on was limited to cooperative releases, some of which relied on the distribution structure of Alternative Tentacles.

After the couple failed in the first few years to try to meet the demands of music and work at the same time, Livengood and Valentine decided to devote themselves completely and exclusively to the band. Both terminated their employment and rental contracts and bought a mobile home so that they could be on tour permanently from now on. The duo's touring activity has continued, with brief interruptions, since 2001.

According to their own statements, the duo spends about two thirds of their careers traveling. The motorhome remains the couple's place of residence even outside of the tour activities and is occasionally used as a recording studio . The couple also runs their Nomadic Fortress Records label, founded in 2010, and their merchandising sales from their motorhome. For tours in Europe, Russia and Asia, the duo uses rental cars , in the form of small vans or mobile homes, as well as trains.

Due to the ongoing tour, the duo often travels to more than 20 countries per year. In the course of this ongoing international journey, Jucifer is described as a “ nomadic project without a home or nation”. 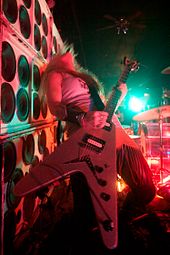 Valentine 2010 in front of the band's loudspeaker wall in Vancouver

Jucifer's style is considered inconsistent and is referred to as sludge, noise rock , alternative rock and alternative metal . Trip-hop , indie rock , grunge and punk are also mentioned as points of reference . Among other things, Minor Threat , Pantera , Nirvana , My Bloody Valentine and The Melvins are used as benchmarks. Particularly faster pieces would remind of the grunge scene of the early 1990s with "a gruff, but still [...] catchy mood".

According to reviewers , the sound of Jucifer is characterized by musical versatility and indeed moves "stylistically between all possible chairs [... they] manage [...] [but] to make their music, which cannot be categorized, sound completely homogeneous [.] “Live, the duo dispenses with synthetic elements such as ready-made sound tracks and presents their music without samples or loops . With a 3 meter high and 4.5 meter wide loudspeaker wall and the use of a PA system designed for stadiums in concert halls and clubs, the duo is certified to be extremely loud.

As a central element of the music most Valentines song is called, "the covers of velvety, seductive, keifend to psychopathic a wide range, with the aggressive tones of voice rarely more likely to train." Her singing is considered common thread of music, a high " Sex factor "is awarded. The singing, however, varies between emotional extremes and is "sometimes dreamlike and sometimes frightening [.]" Valentine's often featured singing is compared to that of Jarboe and PJ Harvey .

“Singer Amber Valentine gives JUCIFER the charisma, because the woman is versatile and believable. She breathes, whispers, screams, pleads, torments, hates, loves. And is a great actress who takes everything for you. She has style and delivers unusual vocal lines, in the tradition of JARBOE and PJ HARVEY. Whereby it overtakes the latter. "

Most of the recorded pieces forego the use of a bass, which could not be played live, in accordance with the band concept of a direct and non-manipulated sound. The drums are played particularly hard and are often reminiscent of Dale Crover from the Melvins. The drums are described as simple and oppressive , but also as powerful and explosive . Guitar playing is mostly described as doomy , as well as slow and monolithic .