Karl Junker with a model of the Junker House , around 1900

Karl Junker attended the Citizens' School in Lemgo from 1857 to 1864, from 1865/66 to 1868/69 he trained there as a carpenter with Wilhelm Stapperfenne. Junker lived from April 1869 to September 1871 in Hamburg , where he presumably worked and learned as a carpenter or cabinet maker. From there he signed up for Munich, where he attended the Royal School of Applied Arts from 1873 to 1875 and on April 17, 1875 in enrolled in the Academy of Fine Arts . A - possibly longer - stay in Italy can be assumed between 1877/78 and 1883. In 1877/78 Karl Junker signed up as “Painter from Munich” in the Casa Baldi in Olevano Romano ; numerous drawings of sites in northern and central Italy were made. Junker had been back in Lemgo since August 1883, from 1887 he was demonstrably living there and on October 27, 1889 applied for the construction of the Junker House , the completion of which he announced on March 9, 1891.

Secretary in the Junker's House

Between the end of 1889 and May 1893, Junker built himself a house in Lemgo according to his own plans, which he himself referred to as a Junker's house and which can be partially visited today. For his pictures and sculptures , the Junkerhaus Museum, which is attached to the rear of the house, opened on September 11, 2004 .

Most of the surviving works by Karl Junker can be dated to the years after 1893, most of which have no date, title or signature. Little is known about Junkers' activities in the almost two decades up to his death. The more than 150 picture fields on the walls and ceilings of the Junker House and the large number of pictures on wood or canvas provide information. 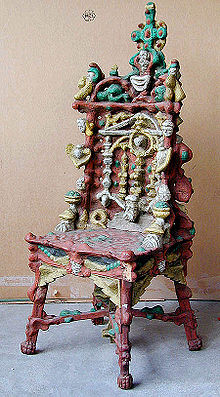 Even during his lifetime, Karl Junker was considered a loner and eccentric. He died of pneumonia at the age of 61 in his hometown and was buried there on January 29, 1912.

An unpublished biography can be viewed in the Lemgo City Archives.

In the year after his death, 55 works by Junkers - 26 paintings , eleven watercolors , 13 drafts and sketches as well as five carvings and furniture - were shown in a separate section of the 6th collective exhibition of the Neue Secession artist group in Berlin. Curt Glaser said in 1914: "Nevertheless it is worth visiting the exhibition of the Neue Sezession just for the sake of Karl Junkers, which with this discovery ensures an attraction that its bigger sister (the exhibition in the Free Secession Berlin) lacks." An unknown author called the exhibition in the volume of Thieme and Becker's artist lexicon published in 1926 "the rather unsuccessful attempt at artistic rehabilitation."

In 1998 a one-day symposium with the title “Art and Architecture in Lippe around 1900: Karl Junker and the Junker House” took place in Lemgo, the lectures of which were published.