The Kathmandu Valley is a landscape in Nepal with the capital Kathmandu in the center .

A look into the rural Kathmandu valley

It extends approximately 35 km in a west-east direction and 30 km in a north-south direction and covers an area of ​​approximately 950  km² . Embedded in the low mountain range of Nepal, however, it is not a valley in the actual sense, but a (former lake) basin with a relatively extensive and flat floor between 1300  m and 1400  m above sea level, which is surrounded by mountains to reach almost 3000  m . No larger body of water flows into this basin from outside; the Bagmati gathers the multitude of streams and small rivers that arise on the valley slopes and drains the area to the south through a narrow gorge.

The Kathmandu valley is climatically favored. The average daily maximum temperatures in Kathmandu in June are 24 ° C, the average minimum temperatures in January are 7 ° C. The temperature almost never falls below freezing point (first snow for 63 years in winter 2006), on the other hand, more than 30 ° C is rarely measured. Because of the prevailing summer monsoon , precipitation falls particularly in the period from mid-June to the end of September. 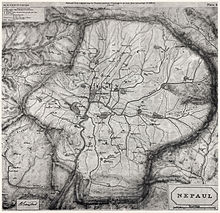 Historical map of the Kathmandu valley from 1802

The surface shape and the climate enable intensive agricultural use and the altitude near the upper limit of malaria favored human settlement, which has been proven for at least 2000 years (see Swayambhunath ). The Kathmandu valley has always been the cultural and political center of Nepal. At times the area was divided into three principalities, the royal palaces of Kathmandu , Lalitpur and Bhaktapur are impressive symbols of power and testimony to artistry. Even today these three cities are the most important settlements in the valley, with Kathmandu being by far the largest city with around 700,000 inhabitants. This is followed, merged with Kathmandu and only separated by the Bagmati, the city of Lalitpur (formerly Patan) with approx. 200,000 inhabitants and a few kilometers east of Kathmandu the city of Bhaktapur with a good 80,000 inhabitants. Some smaller towns, such as Kirtipur or Madhyapur Thimi, have meanwhile developed into cities with more than 60,000 to 80,000 inhabitants each. The growth rates of the cities in the Kathmandu valley are exorbitant and are sometimes over 7% per year. The greater Kathmandu area now has around 1.5 million inhabitants. There are approaches to get the unplanned development under control through planned city expansions. Nevertheless, growth is unchecked. Kathmandu and Lalitpur already take up a larger part of the valley area; the settlement area is now significantly larger than the remaining agricultural area and the complete settlement of the Kathmandu valley in a few years is foreseeable. Rural settlements, individual farmsteads, scattered settlements or villages can only be found on the outer edge of the valley.

The Kathmandu Valley is an ethnic and cultural melting pot; People of different origins are represented here; however, the predominantly urban Newar make up the majority. Furthermore, many members of the Tamang live in the area of ​​the valley, especially on its edge. Most of the people are Hindus , but Buddhism also has many followers. Both religions can be traced back to the earliest archaeological finds in the valley.

The following table shows the development of the population of the Kathmandu valley.

The omnipresence of religion in state and society and the long period of cultural competition between the rulers of the three royal cities led to an impressive array of religious and secular buildings in the Kathmandu Valley, just square meters large temple to house corners or in niches on imposing pagodas and stupas to extensive palace and monastery complexes.

The monuments are rarely older than a few hundred years. The reasons for this lie in the traditional construction method, which uses the locally available building materials adobe and wood and never aimed to create structures that will last forever. There have also been devastating earthquakes and fires throughout history , and finally buildings that were no longer used (for example due to shifts in religious significance) were not considered worthy of preservation. Only since the onset of tourism have western ideas of monument protection gradually been adopted, and there have been and still are a large number of projects, financed from abroad, deal with the renovation and restoration of historically important individual buildings and building ensembles. Since 1979 individual monuments in the valley have been classified as World Heritage by UNESCO . However, this protection status was acutely endangered, as the associated requirements could hardly be complied with due to the strong population pressure, the enormous environmental problems and the lack of money in the state. Between 2003 and 2007 the Kathmandu valley was therefore entered on the Red List of World Heritage in Danger. 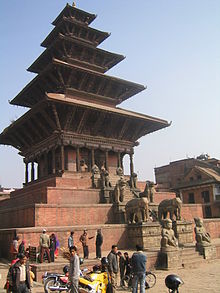 The Nyatapola Pagoda in Bhaktapur

For centuries, Hindus and Buddhists have lived together in a relatively narrow space in the Kathmandu Valley . Their religious buildings can be found throughout the valley, and a typical Nepalese architectural style has emerged in each case. From the outside it is not always possible to tell whether a temple is Buddhist or Hindu; in individual cases there is even a mixed use.

One of the oldest cult buildings is the (Buddhist) stupa , which originally came from India . The most famous and largest stupas in the Kathmandu valley are in Bodnath (north of the airport) and Swayambhunath (west of the old town of Kathmandu ). Other buildings such as monasteries and pilgrims' accommodations were often built in the neighborhood. Often you can see groups of smaller stupas 2-3 m high.

The shape of the Shikhara temple tower, which can still be seen today in the palace districts (Durbar Squares) of the three royal cities, also comes from India .

Typical for the Kathmandu valley is the Nepalese pagoda , which is available in all sizes and designs. It consists of a brick tower with a mostly square floor plan, in which the cult image is located on the ground floor. The up to five floors of the pagoda are made of wood and have roofs that become smaller towards the top and are covered with clay tiles or gold-plated copper sheet. All wooden parts are richly decorated with carvings and often also painted in color. The oldest example of such a pagoda is the Hindu temple of Changu Narayan , located on a ridge north of Bhaktapur. The tallest pagoda in the Kathmandu Valley, the five-story Nyatapola Temple in Bhaktapur, is popular with tourists , even if it has hardly any religious significance today.

In addition, there are a number of other buildings that are used religiously and have a permanent place in the hierarchically ordered caste society of the Newar, for example houses for priests (Math) , houses that are used for religious festivals or for storage only on certain days cult images used in the year.

In the traditional Newar house , as in the temples, a half-timbered structure made of fired bricks and wood is used in the outside area ; inside there are walls made of air-dried clay bricks . As a rule, it is three-story: on the ground floor there is a shop, a workshop or a storage room, the first and second floors contain living rooms with large carved windows in front of the bay. The kitchen and dining room can be found in the attic.

In the last few decades, this traditional house has disappeared more and more from the cities of the Kathmandu valley in order to be replaced by faceless, modern buildings made of concrete or hollow bricks, which is extremely regrettable from a building history and cultural point of view. For the people who live in these houses, however, the advantages are obvious: The modern building materials are cheaper than the bricks, which are now in short supply, and the even more valuable wood, and the buildings are more durable than the brick buildings, which often first began to deteriorate after a few years showed, due to the climate and the fluctuating quality of the hand-made bricks.

At the time of the Rana rule, at the end of the 19th century, residences in the form of French palaces were built by the wealthy, surrounded by extensive gardens. Many of these so-called Rana palaces then fell into disrepair in the course of the 20th century, but some are still preserved and are now used by government agencies or banks.

The location of the Kathmandu valley in the mountains ensured that it could only be reached on foot until the 1950s and was thus for a long time beyond the influence of modern motorized vehicles. The people living in the valley were never isolated, however; the cross-regional trade routes in the valley basin, for example from India to Tibet , were, like the pilgrimage routes, an important reason for the relative prosperity of the population.

The first difficult and winding road through the Mahabharat to Kathmandu, which led over several passes, was not built until the 1950s. Until the 1970s, this was the only road link with the rest of the country and India. The main traffic now runs on the well-developed road that follows the Trisulital from Naubise to Bharatpur. Despite the detour, this route is significantly faster than the shorter, winding old mountain route. A single landslide between Naubise and Kathmandu could cut the city off from the outside world until recently. Since this section of the road is the difficult ascent to the Kathmandu valley, it happened in almost every monsoon season . Since 1996, with Japanese development aid, a new road east of Kathmandu from Dhulikhel to Kamalamai (Sindhulimadi) has been under construction and largely, but not yet completely, completed. This will give the Kathmandu valley a second connection to the Terai and India. The road from Kathmandu to Tibet, which was also built in the 1960s with Chinese help, is of comparatively little importance, especially since it is very often interrupted by landslides in the border area.

Also in the 1970s, a wide ring road was built around Kathmandu and Lalitpur, which represents an important relief for inner-city traffic in both cities. Their function is impaired today, however, as the cities have now developed far beyond the ring road and the road is thus assuming more and more development functions.

The airport in Kathmandu offers air traffic the only international flight connections in the country. The proximity of high mountains makes approaching the airport relatively difficult. Landing is only possible directly from the south along the Bagmati valley. When taking off, aircraft must first fly a tight loop in the valley before they can leave it.

There is no railway line in the Kathmandu valley.

Satellite image of the Kathmandu valley

The Kathmandu valley is now an area with enormous environmental problems. Like all metropolises in developing countries , the Kathmandu / Patan / Bhaktapur agglomeration exerts a strong pull on the population of the whole country. The resulting influx leads to urban sprawl and coalescence, agricultural land is lost, and the strong increase in motorized traffic with the simultaneous absence of modern technologies such as low-emission fuels, particle filters or catalytic converters results in high air pollution. The basin location of the Kathmandu valley makes air exchange difficult, which is why Kathmandu is one of the most smog-polluted cities in the world.

The water supply can hardly keep pace with the population development, especially the sewage disposal is problematic, as there is a lack of sewage treatment plants and the Bagmati River is the only receiving water for the entire region.

The strong immigration of people into the Kathmandu valley also has negative effects on the environment outside the valley: The high demand for fuel (for heating and cooking) leads to further deforestation in the surrounding area and, as a result, to increased erosion , Nepal's biggest environmental problem. Where people move away from the rural areas of Nepal, the fields go into neglect, which with the predominant terrace cultivation results in the irretrievable loss of agricultural land through erosion within a few years.