from Wikipedia, the free encyclopedia
f1

The Gravelines nuclear power plant consists of six pressurized water reactors of the same type, each with a net output of 910 MW. The operator is the French company Électricité de France (EDF). Water from the English Channel , on the coast of which the nuclear power plant is located, is used for cooling .

It is located near the French town of Gravelines in the Hauts-de-France region in the Nord department , about 20 kilometers from the cities of Dunkirk and Calais . It employs around 1,700 people and is the top performing in France. 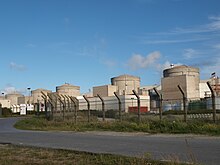 Construction of the first reactor block began on February 1, 1975, and the construction of five more reactor blocks began in the following 56 months. The first was put into operation on March 13, 1980; the last on August 1, 1985.

On October 18, 2016, the nuclear regulatory authority ( ASN ) announced that within three months, EDF had to perform an unscheduled check of the functionality of steam generators at the Gravelines 4 nuclear reactor and four other nuclear reactors that are currently running.

Data of the reactor blocks

The Gravelines nuclear power plant has a total of six blocks :